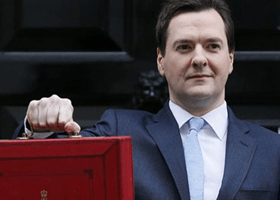 Does Gideon need to start thinking outside the box?

"What we'd like to see is a world in which banks are nothing more than intermediaries between lenders and borrowers" Fran Boait, Positive Money

We live in difficult economic times.

On the one hand we're constantly told by ministers that 'the government's long-term economic plan is working', but a quick glance at facts and figures suggests that's only true if we radically redefine the meaning of the words 'plan' and 'working'.

MPs don't seem to understand the economy, let alone have the ability to fix it. According to a survey of MPs by the campaign group Positive Money in August 2014, only one in 10 understood how money is created – a sobering thought indeed.

The good news is that there are plenty of people floating ideas about how the economy might be run. But are they pie in the sky, or could they actually work?

For Positive Money, the way money is created is the big problem. Executive director Fran Boait explains: "Most of the money we have in the economic system at the moment is debt. The result of this is housing bubbles and instability which is bad for our economy."

It also means we have to pay interest on that money – and lots of it.

The people at Positive Money believe changing the way money is created could revolutionise everything. They would remove the power of banks to create money (by issuing loans) and return it to a democratically accountable body. It could be put into the real economy, rather than spent on property bubbles. Banks would still exist, but would only be permitted to invest what has been deposited with them.

"What we'd like to see is a world in which banks are nothing more than intermediaries between lenders and borrowers," says Fran.

Give us all a basic wage

The idea of giving everyone a guaranteed minimum wage seems insane, but that hasn't stopped the Green Party from including it in its manifesto.

Their vision places each and every one of us – regardless of our employment status – on benefits. We'd all receive a basic weekly wage which either supplements our income or supports us when we're out of work.

The instant response to this is that there simply is not enough money out there. However, the scheme would be paid for by removing most current benefits, such as tax credits, and lowering the threshold at which we start paying tax. The Greens believe the entire scheme would be cheaper than the current system, while the Citizen's Income Trust puts the entire cost at £276bn – only £1bn more than the current system.

Under their proposals everyone under the age of 24 would receive £56, while those between the ages of 25 and 64 would receive £71. Pensioners meanwhile would receive £142.70. On top of this, those who needed them could still receive housing and disability benefits.

The benefits would be a simple system and one which doesn't penalise you once you get into a higher tax bracket or go from being unemployed into low-paid work.

There are times when economic theory is about coming up with a plan, closing your eyes and praying. Some would say this was the case with quantitative easing.

With financial markets close to collapse, governments in the US and the UK pumped huge amounts of money into financial systems in the hope that it would make its way into the real economy, increase lending and generally avoid the collapse of the system and a return to a barter economy.

The cost was astonishing – around £6,000 for every person in the country and it only partially worked. While we haven't returned to our agrarian roots, it hasn't exactly kick-started small business lending either.

This has prompted a number of economists to shrug their shoulders and mutter darkly that we should have given each and every one of us our own £6,000 share.

We'd then invest it, spend it, or pay off our debts – all of which are good things.

"There are a number of ways in which this can be done," says Fran. "One would be to transfer money into people's bank accounts, which would certainly be the simplest. Another would be to spend money on building new houses and paying people to build them."

Giving us all £6,000 and a weekly wage both have obvious appeal, but no major party is considering these options.

However, given the absurdities of our current system, there are more and more people suggesting we should give some of these ideas a go – what could possibly go wrong?