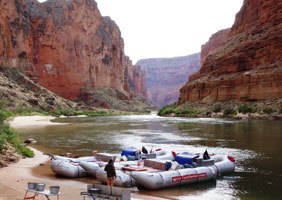 The calm before the storm... (Image: Anne and Rick Newman)

As the mighty Colorado River sent another spurt of ice-cold water straight into my crotch, I felt the pain of the pioneers on the 1869 Powell Geographic Expedition.

The story of the first rafting trips down the Grand Canyon aren't for the squeamish. They were led by one-armed American Civil War veteran Major John Wesley Powell, a controversial figure whose authoritarian style didn't sit too well with the small group of outlaws, trappers, hunters and other individualists who were coot-crazy enough to step onto a boat with him.

Chances of survival were slim, particularly given the fact that many of Powell's crew decided that attempting to scale the vertiginous, 5,000-foot canyon walls and find their way across unknown desert and hostile 'Indian' country was preferable to staying on board with the barking major.

Barely hours into a seven-day rafting and camping trip taking us the 277 miles from Lees Ferry, Arizona, to Pearce Ferry above Lake Mead and the Hoover Dam, I was already plotting my own suicidal escape route back to the bright lights and flesh pots of Las Vegas. 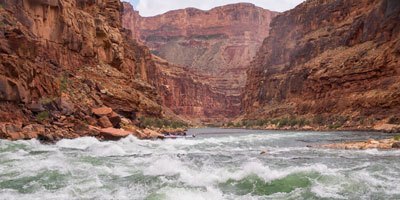 How do I get out? (Image: William J Van Trump)

I'd chosen to ignore early season warnings of cold weather in May and the veritable 'cheapest rain suit I could get off Amazon' just wasn't doing the business. But a little sunshine allowed the break-out of the shorts and t-shirt and I was soon fully in tune with the rave reviews I'd seen for this trip.

You hook up with Grand Canyon Expeditions in Vegas, ready for an early morning drive to the departure point. Our two-boat party of 28 was an eclectic mix of ages and backgrounds, largely composed of Americans and Canadians, with a smattering of Brits in the mix. The summer holiday period sees a greater bias towards family trips, with a recommendation that kids should be at least 12 to cope with the physical demands and get the most from the experience.

The bracing, 30-degree water released from Lake Powell by Glen Canyon Dam is an initial shock, but there are also comforts undreamed of by the early adventurers. 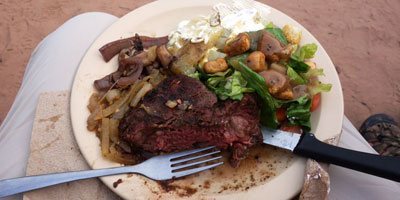 Our motor-powered rafts, the Hakatai and the Mount Emma, are impressive, 37-foot 'S-Rigs' that carry our luggage, camping gear and a huge volume of supplies which our crew use to create the most delicious of meals for every breakfast, lunch and dinner.

We're undoubtedly the tourist cruise ships of the Colorado, drawing disapproving glares as we motor past the oar-powered inflatables and the elegant, wooden dories that cut their way through the rapids on their two-week journey down the Canyon. 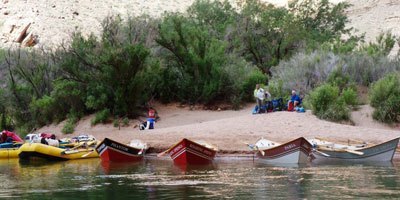 But it's hard to think of ourselves as being in the tourist mainstream as we drift through the vast chasm, which reaches widths of up to 18 miles.

For one, fleeting minute on our seven-day journey we catch a glimpse of the famous Grand Canyon Skywalk, a hellishly expensive tourist trap where the Vegas crowd queue for hours for a time-restricted step over the Canyon on a transparent walkway.

As I peer up at the specks of their feet 4,000-feet above, I can only surmise that they don't get to see much. 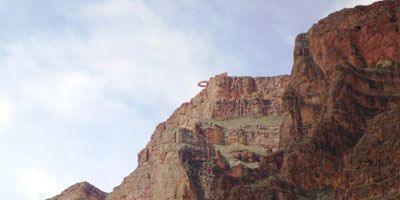 A giant toilet seat? No, it's the Grand Canyon Skywalk (Image: Anne and Rick Newman)

At river level it's possible to enjoy nature, getting closer to it on frequent hikes up side canyons to soak in stunning waterfalls. Bighorn sheep and vultures are the most common wildlife sighted, but look out for mule deer, coyotes, hawks, golden eagles, falcons and much more.

Our crew, consisting of a captain and a 'swamper' on each boat, are all passionate about conservation - outdoor types who spend their winters in ski resorts or working for national parks.

When I express my delight at the lack of bites from mosquitoes or other flying creatures, they howl with indignation; the reason for the lack of bugs is, apparently, the unnatural, twice-daily release of water from Lake Powell that disrupts spawning grounds and makes the Colorado one of the unhealthiest rivers in the States.

The conservation question comes into stark focus as we approach the confluence with the Little Colorado River. 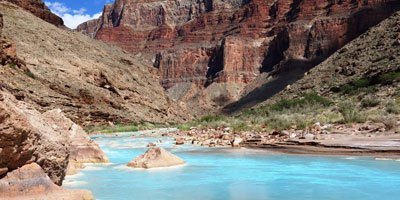 The stunning, azure water running into the darker bulk of the main river is one of the most glorious sights I've ever seen and we hike up the side canyon before floating back to the raft on the sky-blue surge, buoyed by our lifejackets.

But plans are being hatched to build the so-called Grand Canyon Escalade above this perfect patch of nature, a tourist destination which would offer gondola rides down to river level where there'd be elevated walkways to cater for the mass of visitors. It wouldn't be hard to imagine casinos, ice cream stands and dancing girls quickly following.

Our boat captain Beavs - a heavily bearded man of the river who you'd struggle to picture in any other profession - has been laconic in the extreme to this point in the trip, but when the subject of the Escalade is raised he launches into a furious 10-minute diatribe, encouraging everyone to sign petitions and join the opposition. 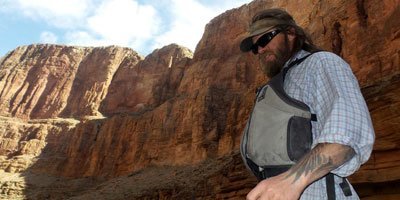 If he isn't quite throwing his hat onto the floor and furiously dancing on it, that's the vision that's set in my mind.

But Beavs is back in his element when helping me enjoy my personal highlight… running the nearly 200 rapids that we navigate in the course of the seven days, many heralded with revered names such as Soap Creek, Hance, Sockdolager, Hermit, Crystal and the infamous Lava Falls.

My love of one-day rafting excursions on previous holidays had largely inspired this trip and the thrill of a week's worth of theme-park-like fun didn't disappoint.

You choose your seat according to the sort of experience you want… sit in the middle of the boat for an armchair ride where only the biggest rapids will get you wet, but for the most fun sit at the front, on the tip of the raft.

From my perch there I enjoyed Crystal, Lava and the other feared rapids with a minimum of incident, but the white water is always unpredictable and I took a heavy side-swipe on a lesser section that would have easily swept me and my neighbour overboard if I hadn't been holding on feverishly. 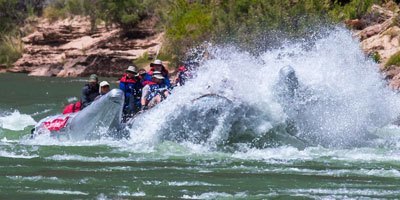 Why the front is most fun... (Image: William J Van Trump)

It's enough to make you feel at one with the river and - if the cold from those early hours before the sun came out will linger long in my bones - seared far deeper into my mind are the memories of a staggering, thrilling, awe-inducing journey into one of the planet's true wonders and wildernesses.