How you could save £685 on your energy next year 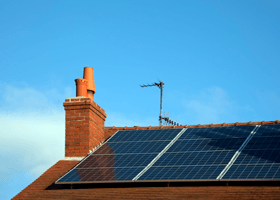 The clock's ticking on solar savings

"From January 2016, the Government’s feed-in tariff that it pays to those who generate their own solar electricity is being slashed"

Just make a commitment to a few simple energy hacks and reap the rewards without feeling the cold.

Take back what you’re owed

This one’s really breathtakingly simple, because it merely involves asking for money back that you’re perfectly entitled to.

Recent research by Gocompare.com has uncovered that 10.4 million UK homeowners are owed £95 each on average in overpaid gas and electricity bills.

Despite new rules to stop large credit balances building up, a quarter of those in credit are owed over £100, yet only 24% said their energy company had refunded the surplus unprompted.

There’s no good reason why your energy company should get to keep your cash and earn interest on it instead of you, so check your bills now.

If there’s a decent-sized credit balance amassed, ask for it to be repaid.

Ok, this one takes a bit more initial upheaval and commitment, but if you’ve ever considered upping your green credentials with some solar panels, now’s the time to jump in.

Once the installers have done their stuff, you can sit back and watch the savings clocking up.

But if you’re doing it, do it quick – from January 2016, the government’s feed-in tariff that it pays to those who generate their own solar electricity is being slashed from 12.47p/kWh to just 1.63p/kWh.

That means that an average solar panel owner in London would see a feed-in payment of just £83 per year, despite installation costs of at least £5,000.

So where’s the money saving in that, I hear you cry? Well, if you’re quick and get that solar installation done by the end of the year, the feed-in rate is based on the date of installation and fixed for 20 years, rising with inflation.

Based on the more generous current rate, according to the Energy Saving Trust that means you could generate savings and payments of £635 a year.

That means over 10 years, you could have made £1,350 after factoring in paying for the installation. So you’ll be playing the long game, but if you do that could make you £135 a year better off.

We’re painfully aware we may have mentioned this once or twice over the years, but some of the biggest and quickest savings you can make on your gas and electricity is by switching suppliers.

According to Gocompare.com, at least 51% of customers who provided their energy usage and got a quote saved £291 or more from 1 April-30 June.

Never switched? It’s no biggie – just check your usage, give a few details and let the energy companies handle it from there.

Do you like to leave your landing light on all night? If your typical landing light has a 60 watt bulb, that means you might be leaching 0.48kWh over eight hours of darkness.

Recent research by the Energy Saving Trust also discovered that 43% of pet owners leave the heating on for their adored animals, which could add £140 a year to their energy bills. Knitting Fido a jumper and investing in a cosy bed for Tiddles could mean a whopping saving.

Remember, with earning potential of nearly 25 quid based on turning off just the one light and £140 for refusing to cosset your canine, I bet there are other power-down savings you could make round the home if you put your mind to it – and with savings like that it’s well worth the effort.