Household habits: What do Brits hate most about sharing a home?

Skimping on chores? Living untidily? Leaving the lights on? Which bad living routines do Brits find the most annoying? We asked the nation to find out.

Whether it be with family, friends, partners or even strangers, most of us have shared our home at some point during our lives. When living in such close proximity to others though, it’s inevitable that we’ll notice a few of their less desirable traits from time to time.

From leaving the landing light on to letting food go off in the fridge, all of us have been affected by others’ bad household habits. But, we want to know which of these bugbears Britain finds the most infuriating.

To find out, we asked the nation about their most hated household quibbles, then picked out the most common (and most amusing) responses.

The 10 most hated home habits

According to our survey, Brits agree the most annoying household habit is… people not cleaning up after themselves. Unsurprisingly, this pet peeve was voted the most irritating by half of our respondents.[1]

Leaving electrical appliances switched on was a close runner-up, with 49% choosing this as one of their greatest gripes. Given that energy prices have soared during 2022, it’s no surprise that this ranks so highly - wasteful energy use has a costly impact on bill payers' wallets and the environment.

Minimising unnecessary energy use can make a big difference to your household bills. Start by ensuring you prioritise switching off electricals and gas appliances when they’re not in use. If you’d like more information on how to reduce your energy consumption, check out our handy energy-saving tips page.

Other commonly loathed offences included not changing the toilet roll - selected by 39% of Brits as a household no-no. Leaving wet towels and dirty clothes lying around also ranked among the five worst habits as voted by the public.

Based on these results, it’s clear that Brits value housemates who make an effort to keep on top of regular tasks. So, if you share your accommodation with others, be sure to chip in where you can and try not to slip into any idle routines.

Do men and women have the same hated habits?

Men and women are most irritated by the same bad habits, although they don’t rank them in the same order. 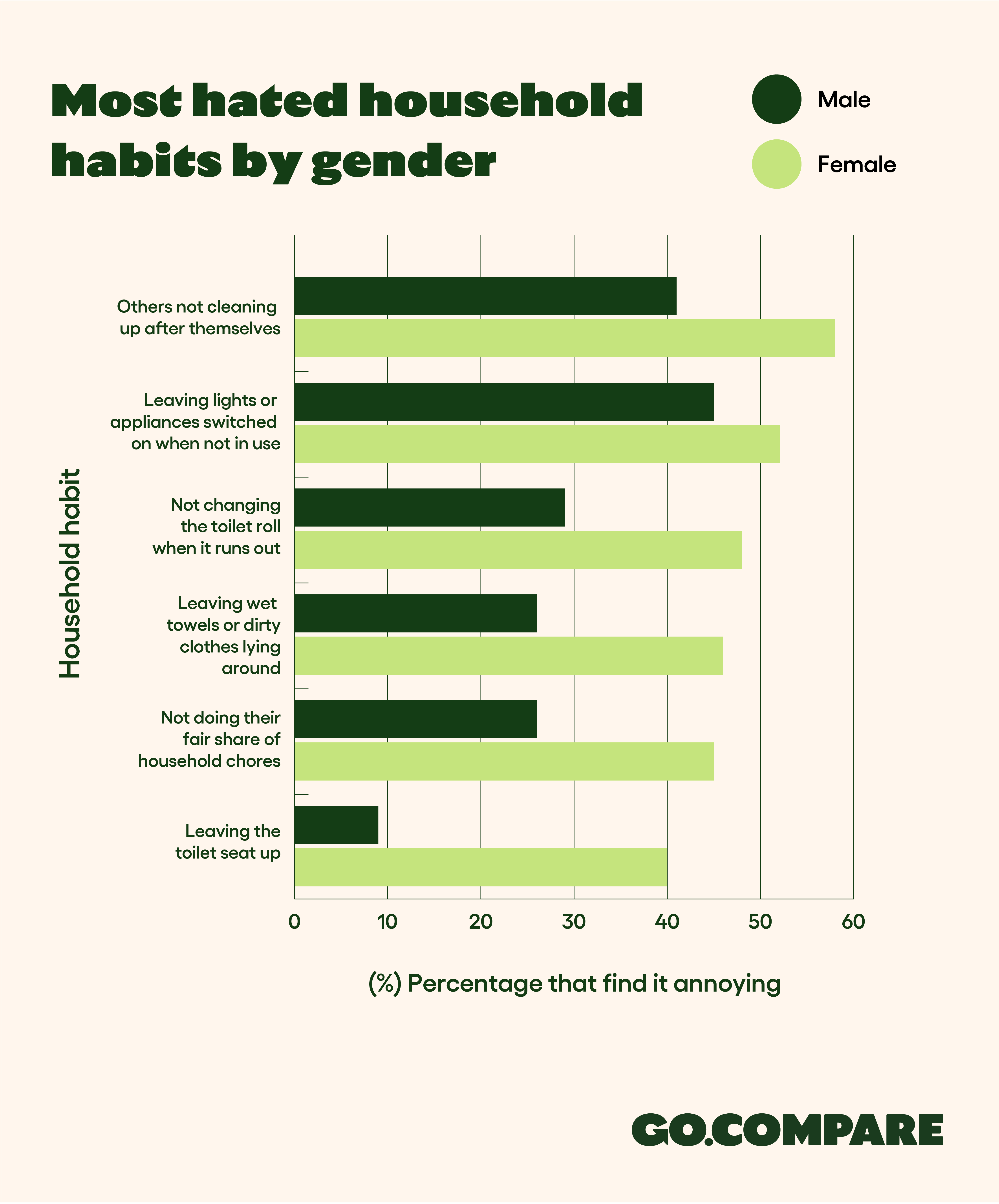 Women voted for others not cleaning up as the worst household offence. Men, on the other hand, are most irritated when lights or appliances are left on unnecessarily - 45% of men picked this wasteful habit.

Overall though, women voted for more household bugbears than men. In fact, this was the case across the board, as every option on our survey was selected by a higher percentage of women, suggesting they get more irritated by lazy living routines.

The biggest difference between men and women, though, was their opinion on one particularly infamous domestic debate - is it ok to leave the toilet seat up?

A huge 40% of women were upset over seat-uppers, compared to only 9% of men - proving that leaving the toilet seat up is indeed a typical trait of men up and down the country.

It seems that men have lower standards in general when it comes to toilet etiquette - 48% of women were irritated by others not changing the loo roll, but just 29% of men thought this was bad behaviour.

Leaving wet towels and dirty clothes lying around also sees a similar level of disparity, being chosen by 46% of females and just 26% of males, representing a difference of 20 percentage points.

Younger Brits are most irritated by bad household traits, with 18-34 year olds selecting almost every complaint on our survey as problematic. Kitchen conflicts got under their skin in particular. 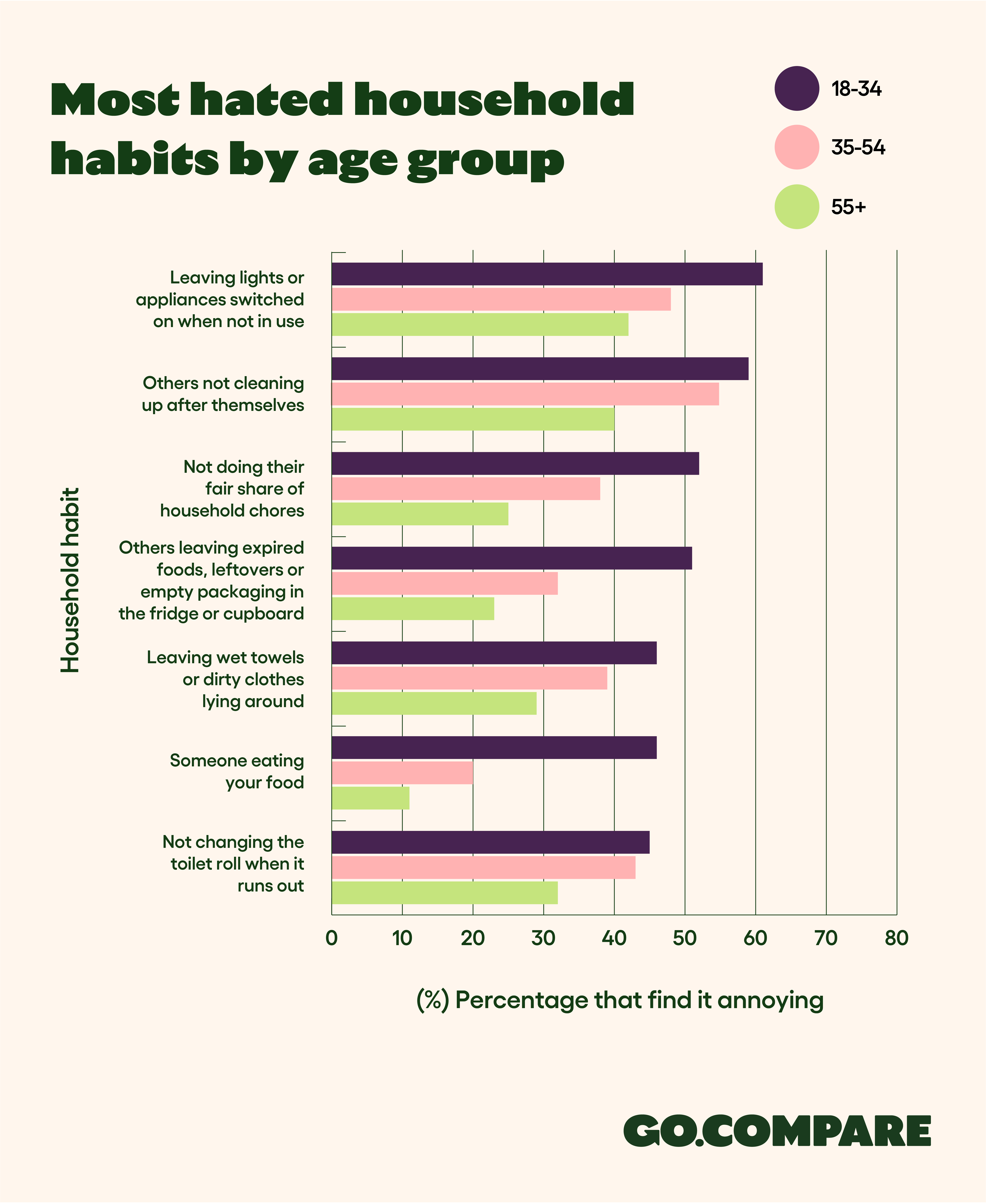 Half (51%) of 18-34s get annoyed with others leaving expired foods, leftovers or empty packaging in the fridge/cupboard. A further 46% reported food stealing as another common grievance in their household.

Kitchen quarrels were less of an issue for older generations though - just 23% of over 55s reported lingering leftovers as a problem and merely 11% of older adults complained about food thefts. This may be because many younger adults live in shared accommodation - where communal kitchens are commonplace - or are still living with their parents.[2]

Surprisingly, both younger and older generations voted for the same most hated habit. Both age groups said that leaving lights and appliances on when not in use was the worst overall trait - selected by 61% of 18-34s and 42% of over 55s.

Meanwhile, 35-54s are most irritated by those who don’t clean up after themselves, selected by 55% of this age group.

For many respondents, our survey provided a free opportunity for them to vent their individual frustrations, giving us some priceless responses as a result.

For one of those we asked, it was less about what their housemates do but rather when they do it. They stated their biggest gripe as: “Trying to engage me in conversation when I'm on my first coffee - that’s dangerous.” If you’re not a morning person, you will likely agree that it’s risky business for someone to disturb you at the start of the day.

Others complained about their partner’s pile-up of possessions, with one pollee commenting “If we ever move we'd need five moving lorries.” Luckily, most home insurance policies cover removals, ensuring every bit of bric-a-brac is protected when you relocate.

Sometimes though, it’s just kids’ unwillingness to chip in with the housework. One fed-up parent named their biggest gripe as being “teenagers thinking they live in a hotel!”

What else bothers Brits about living with others?

Other common complaints among our respondents included space and privacy issues, as well as others being overly loud or chatty (particularly when trying to sleep or watch TV). In fact, contention over the telly was the scorn of many, as several expressed their frustration at remote hogging behaviour.

Mealtimes also seem to be a source of conflict, with a number of Brits complaining about loud or messy eaters, as well as others not doing their fair share of the cooking. Making arrangements for paying bills was also a hot point of contention.

On the other end of the scale, some took our poll as a chance to own up to their mistakes, admitting that they’re usually the guilty party. When asked to name other’s bad household habits, one respondent revealed: “Nothing, I’m normally the culprit!”, while another agreed: “Nothing - others find me annoying though!”

If your lifestyle has been a source of stress for others, confessing your wrongdoing is at least a start towards changing things for the better.

Are you a housemate angel or a cohabiting clutterbug? Take our quiz to find out. Simply tick which household crimes you’ve committed in the past and you’ll receive your own ‘nuisance score’ out of 100 points.

Simply tick the habits that you have done to get your 'nuisance score'. Each score is out of 100 annoying points

[1] In order to collect the data used in this report, we conducted a survey of 2,000 UK residents via YouGov. The survey was run on 21 October 2022 and all responses were selected at random. All statistics featured on this page are sourced via this survey unless otherwise stated.

[2] Data from Built Asset Management (as reported in BuyAssociation) shows that 28 is the average age of those living in shared accommodation in London (and adds that this trend is often reflective of the country’s other major cities). Latest ONS data also shows that 28% of 20-34-year-olds live with their parents.