Gender save gap: The effect on first-time buyers

We take a look at the impact of the gender pay gap on first-time buyers who are saving for a house deposit. 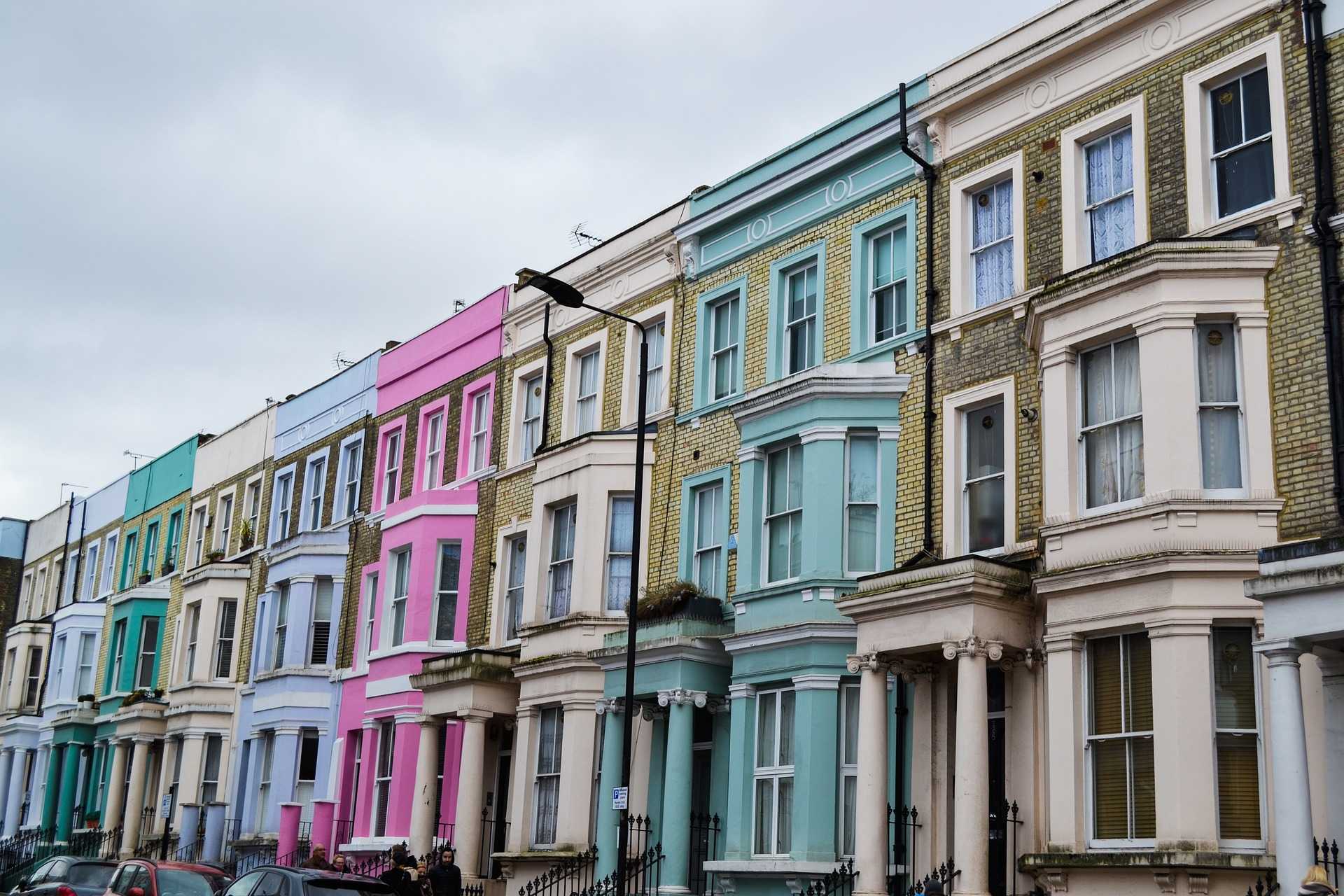 For many first-time buyers, the prospect of purchasing their first home can sometimes seem like a daunting task. With house prices rising, young people are faced with the challenge of penny-pinching to save up for a deposit.

A deposit is important because it affects the mortgage that you’ll receive. Your mortgage lender will look at your affordability and decide how much you can borrow. The size of your deposit contributes to this, along with other factors. You’ll need at least 5-10% of your total loan value, but more is usually better.

This means that as first-time buyers, you’ll likely be saving for a few years. In fact, our research has shown that, on average, 22 to 29-year-olds will need a minimum of around 3.8 years to put away enough money for the average 10% deposit.

However, because of the gender pay gap, women are placed at a disadvantage.

The gender pay gap measures the disparity between how much women earn compared to men. Since female first-time buyers have, on average, a lower gross weekly earning, this impacts the amount they can put away each month towards a house deposit.

Our estimates show that women need an average of at least 5.5 years to save up, whereas men could collect the same amount in just 3.7 years. That means women have to wait 51% longer than men before they can afford to buy their first home.

How does the gender pay gap affect first-time buyers?

Although it’s possible for first-time buyers to save enough for a deposit in under four years, in practice, most need much longer than this. Our recent survey found that over half (56%) of homeowners were unable to put more than £199 per month towards their deposit.

At this rate, it would take the majority of first-time buyers 10 years to save for their first home (including the deposit and additional costs, such as legal fees). 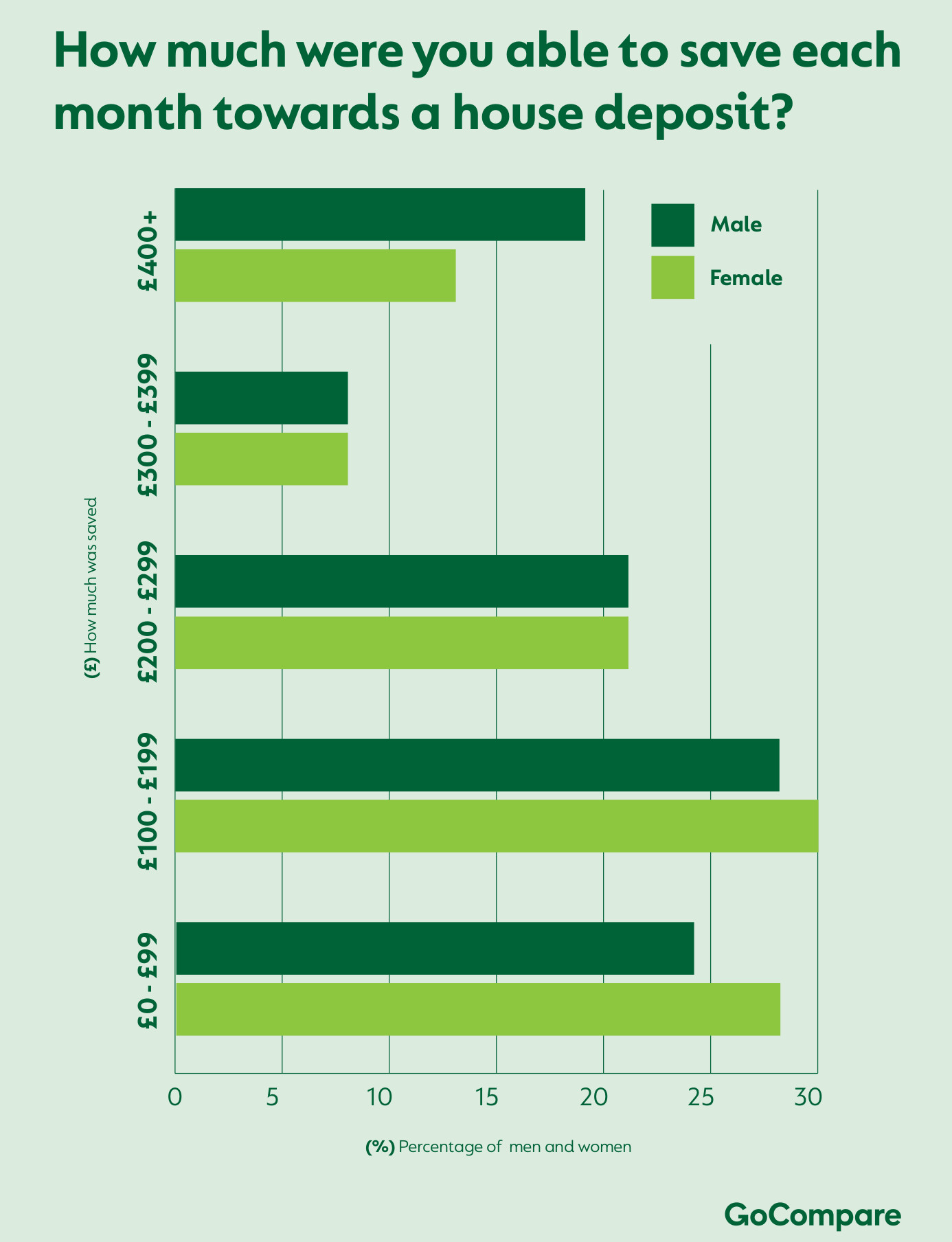 When we split our survey results by gender, we see the pay gap in action, as more men than women were able to save a higher amount. Of those only able to save up to £199 per month, 58% were women, and 52% were men. Whereas, at the other end of the scale, 19% of men told us that they saved over £400 per month, compared to just 13% of women.

Zarah Gulfraz, mortgage expert at mortgage broker Mojo Mortgages, offered these tips to first-time buyers who are finding it difficult to save:

“It may, on average, take women slightly longer to save for a deposit, however, the challenges of saving for one apply universally for both women and men. While saving for one can seem like a bit of a pipedream, there are some simple ways you can put money aside each month.

“Six effective ways to manage this are:

If you have a property price in mind and are wondering how much to save each month, or how many years it’ll take to reach your goal, use our handy mortgage deposit calculator to get an estimate.

If you’re finding it tough to save enough money for a deposit, government schemes like Help to Buy and Right to Buy can assist you in getting on the property ladder with a smaller amount. However, our research has found that only a small percentage of buyers are taking advantage of these systems.

When responding to our survey, 73% of homeowners said they didn’t use a government scheme to help them buy their first home. Interestingly, the results showed that a higher percentage of men than women chose to use one.

We asked Dr Sara Reis, deputy director and head of research and policy of UK Women’s Budget Group, if there should be more government help for women trying to save for their first home.

They said: “There should be a recognition that the gender gap in pay has a wide range of consequences, including making it harder for women to save for a home, or rent on their own. It also creates a gulf in savings and pension that gets wider during women and men’s lifespans.

“When setting standards of what counts as ‘affordable’ housing, for example, the government should bear in mind that affordability will not mean the same to every group. What is affordable for the average worker will still be out of reach for the average female worker.”

If you’re in the process of saving for a house, remember to look at what schemes are available to you. There are also plenty of alternative ways to receive help. For instance, the majority of first-time buyers use a mortgage broker. Up to 73% of buyers use a broker rather than dealing directly with the lender, a figure that likely increases if it’s your first time purchasing a house.

Are women aware of the gender save gap?

With the gender pay gap hitting the headlines in recent years, we were surprised to see that only a minority of people know about its effect on prospective buyers. According to our survey results, just 26% of homeowners are aware of the gender pay gap’s impact on women’s ability to save for a house.

In fact, over two-thirds (68%) of women stated they were unaware that they may have to save for longer than men for their first home. However, of those women who were aware of the effects of the pay gap, the majority were concerned about it. When asked if they felt that the gender pay gap had made it more difficult for them to buy their house, 69% agreed that it had.

Dr Reis discussed what more businesses can do to help reduce the gender pay gap:

“Ensuring that flexible working is available for all can truly make a difference. As far as possible, this flexibility should genuinely serve everyone’s needs, the employee’s, as well as the business’.

“Part-time work should not be seen as proof of lack of career ambition, but rather as a work pattern as valuable as full-time. There should not be a distinction in hourly pay terms. This flexibility of working patterns would ensure that talent is retained – we would see fewer women dropping out of sectors because of punishingly long hours or inflexibility.”

If you have saved up for a deposit, compare mortgage rates for your first home with our mortgage partner, Mojo Mortgages, at GoCompare. We can help find the right mortgage for you.

To estimate the minimum time first-time buyers need to save up for a deposit, we reviewed the income and expenditure for adults under 30. This age group was used as it was identified that most first-time buyers save for their house during this life stage.

Using official government data, we analysed the average weekly expenditure for adults under 30, along with the average gross weekly earnings of 22-29-year-olds (minus tax and deductions). This was broken down by gender so that we could calculate the time men and women would need to save for a deposit, and compare the difference.

From this, we worked out an average net weekly income and remaining weekly disposable income for men and women. Then, we took the average UK first-time buyer house price and the average deposit at 10% LTV.

Finally, we divided the average deposit cost by the average disposable income of a male and female first-time buyer, to work out the estimated minimum time (in years) that a buyer would need to save up this amount.

To work out the actual amount of time it’s currently taking first-time buyers to save, we used the real-life majority figure from our survey results (56% said they could not save more than £199 per month). We simply inputted that into our initial calculations to get the updated number of years.

All survey results were taken from a YouGov survey of 1,618 homeowners, between the ages of 19 and 40.

The government-led English Housing Survey, 2019-20, was used to find the percentage of female and male single and joint homeowners.

We used an ONS dataset to find the average weekly, monthly and yearly expenditure for adults under 30, as well as the average gross weekly earnings of 22-29-year-olds. This data was split by gender, allowing us to compare the differences in income and expenditure for men and women.

Using Listen To Taxman’s UK tax calculator for 2021/22, we worked out the total deductions from their earnings, to give us the average net weekly income.

We used multiple sources to calculate the additional costs to first-time buyers (on top of a deposit), including Which? and Conveyancing Calculator. These were used to estimate fees for stamp duty (0% FTB relief), legal fees, disbursements, Land Registry and other fees.

These sources were also used to identify the costs of moving house (assuming a two-bedroom house), mortgage fees and survey costs (homebuyer report).