Our tracker mortgages comparison service is powered by Mojo Mortgages[1]

Hands down, the best mortgage named after a cereal bar...

After some info on tracker mortgages? Let GoCompare be your guide to these variable rate mortgages that follow the Bank of England's base rate, and help you compare what's out there!

If you’re flexible with your finances and aren’t risk averse, then a tracker mortgage might be the thing for you. We tracked down a couple of financial experts to find out more about these variable-rate mortgages…

Tracker mortgages are a type of variable-rate mortgage. If you have a tracker mortgage, the rate you pay follows – tracks, if you like – some form of economic indicator. In the UK this is almost always the Bank of England's base rate.

And what’s the base rate?

What’s the difference between variable and tracker mortgages?

Variable mortgages come in two basic flavours: tracker and standard variable rate (SVR). We’ve got a whole page on variable-rate mortgages. But in short, SVRs follow the lender’s interest rate which it sets and changes, instead of the Bank of England’s base rate like a tracker. 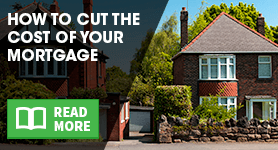 The term of most tracker mortgages is usually two or five years. A lifetime tracker follows the Bank of England’s base rate for the whole duration of the mortgage.

OK, so how does a tracker mortgage work?

If the Bank of England announces another rate rise – say it goes up to 1% – then your ‘base rate plus 2%’ tracker mortgage is now at a 3% rate, and your mortgage payments will increase.

Tracker mortgages are more common when remortgaging than when buying a property. One reason for this is the better rates available to homeowners with larger deposits. And people remortgaging their homes are more likely to have a bigger deposit than a buyer.

What’s the advantages to tracker mortgages?

Trackers tend to come into their own when interest rates are low and falling.

At the time of writing in autumn 2018, the Bank of England raised the base rate to 0.75%, the highest it's been since March 2009. But, these are still relatively low figures compared to previous decades: it fluctuated between 3% and 6% from 1999 to 2008. Yet, we've just seen the first rise in a while, and experts are predicting more to come.

Holly Andrews, managing director at KIS Finance, says: “One of the main advantages of a tracker rate mortgage is that, when the Bank of England’s base rate is low – as it currently is, standing at 0.75% – your mortgage interest rate will be low too.

“The interest rate charged on a tracker mortgage should be considerably lower than the lender’s standard variable rate, as the Bank of England’s base rate tends to be substantially lower. Tracker deals are normally fixed for a term of two to five years at the beginning of your mortgage term, so it is possible for you to save a substantial amount of money during this period.”

Do tracker mortgages have any disadvantages?

Holly Andrews from KIS Finance says: “If there was a sudden, sharp rise of the Bank of England’s base rate, you could see a substantial change in the rate you are paying, as any changes are applied to tracker mortgages immediately. The Bank’s Monetary Policy Committee (responsible for setting the base rate) meet eight times per year, so you may find yourself spending a lot of time feeling anxious waiting for the results of the meetings, knowing that it could directly affect your monthly outgoings.

“After the tracker deal period has ended and you choose not to transfer your mortgage to a different lender or a different deal, your mortgage will be put onto the lender’s standard variable rate. You may find this to be substantially higher than the tracker rate you were paying, increasing your monthly repayments.”

With Brexit looming, should homebuyers be looking at fixed-rate mortgages instead?

So… it’s time to talk Brexit.

Steve Opie, mortgage specialist from Spectrum Independent Financial Advice says: “There is considerable uncertainty about how Brexit will affect interest rates, so home buyers may be better off taking out a fixed-term mortgage in the short term.”

Holly Andrews from KIS Finance says: “The biggest advantage of a fixed-rate mortgage is that it provides certainty, something that people desire in the current uncertainty of what will happen after Britain leaves the EU.

“In all likelihood, Brexit will somehow affect the housing market, mortgages and – more importantly – interest rates. How they will be affected is something we are currently unsure about.

“There are currently some excellent deals for fixed-rate mortgages, which could last up to five years, going way beyond the Brexit date of March 2019.

“There’s no way of knowing exactly what will happen after Brexit, so in my opinion, homebuyers should be looking to fixed-rate mortgages purely for the certainty of what you will pay.”

So is a tracker mortgage right for you right now? You may wish to speak with an independent financial adviser or mortgage adviser if you want bespoke information for you and your home.

Can you compare tracker mortgages?

Of course you can! We’ve teamed up with MortgageGym to help you explore what’s out there when it comes to tracker mortgages. There’s always time to go compare and see what you could save! Try MortgageGym’s calculator to get started.