The future of electric vehicles: our predictions

With the government set to ban the sale of new petrol and diesel cars from 2030, we take a look at the future of electric vehicles in the UK. 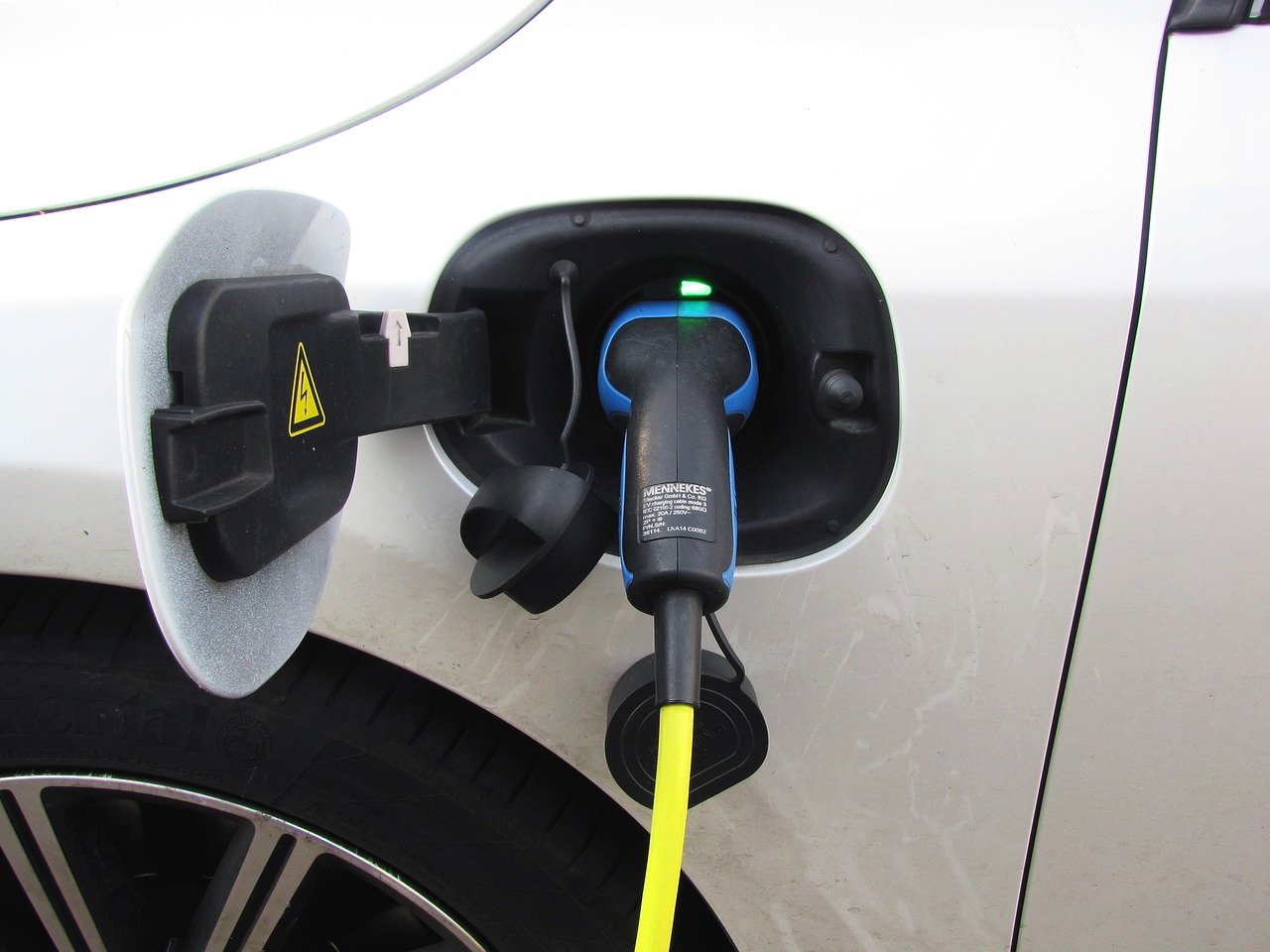 From 2030, the sale of new petrol and diesel cars will be banned in the UK. So, the development of electric vehicles over the next decade is critical.

We have seen an 84% increase in electric car insurance quotes over the last year. Now, we want to help you understand how our cars will be changing. That’s why we’ve analysed the evolution of battery electric vehicles (EVs) over the last 10 years and made five predictions for the future of EVs in the UK.

Our report answers several key questions, such as whether charger infrastructure will be able to keep up with demand and, critically, if mass adoption of electric vehicles will occur before the 2030 ban.

When will mass adoption of electric vehicles arrive?

Unless significant government schemes or breakthroughs in EV technology are introduced, we predict that mass adoption of electric vehicles won’t happen within the next 10 years. This means we won’t see mass uptake of EVs ahead of the 2030 ban on the sale of petrol and diesel vehicles.

This is because the battery technology that most customers are looking for won’t be available at a price point they’d be willing to pay.

A 2020 Castrol study found that in order for mass adoption to occur in the UK, EVs with a 30 minute charge time and a real-world range of 283 miles will need to be available for approximately £21,620. Our projections show that lower-cost EVs with this range will be available, but it’s unlikely that they’ll be sold at the £21,620 price point consumers are looking for.

This is based on the UK’s best-selling affordable EV, the Nissan Leaf. If current trends continue, the Leaf will have a real-world range above 283 miles per charge by 2031, but its price point is likely to remain above £28,000. This means that even if lower-cost EVs deliver the range required, they will still be priced higher than what consumers are willing to pay.

In order for this technology to reach the desired price range in the next 10 years, a larger grant on the purchase of plug-in cars may need to be introduced.

However, If you struggle to find a suitable electric car in 2030, there is a halfway house option - you could consider buying a hybrid vehicle instead. Hybrids aren’t reliant on electricity alone, so they can bridge the gap between a conventional ICE (internal combustion engine) vehicle and an EV.

Richard Norris, managing director of Drive Green, said: “The biggest challenges facing EV uptake are price and availability. Demand for EVs is growing exponentially and manufacturers are struggling to keep up.

“As a result, there is not much choice out there for consumers with a low car-buying budget, which will make switching to an EV hard to afford.”

But the initial outlay doesn’t tell the full picture, he says. “Hopefully, when you factor in fuel and maintenance savings, and lower depreciation, it may still be possible for people to push their budget higher than it would otherwise have been, to enable them to make the switch to zero-emissions driving.”

How will electric vehicle sales change in the next 10 years?

The number of EVs on UK roads is set to soar over the next decade, if current trends continue. 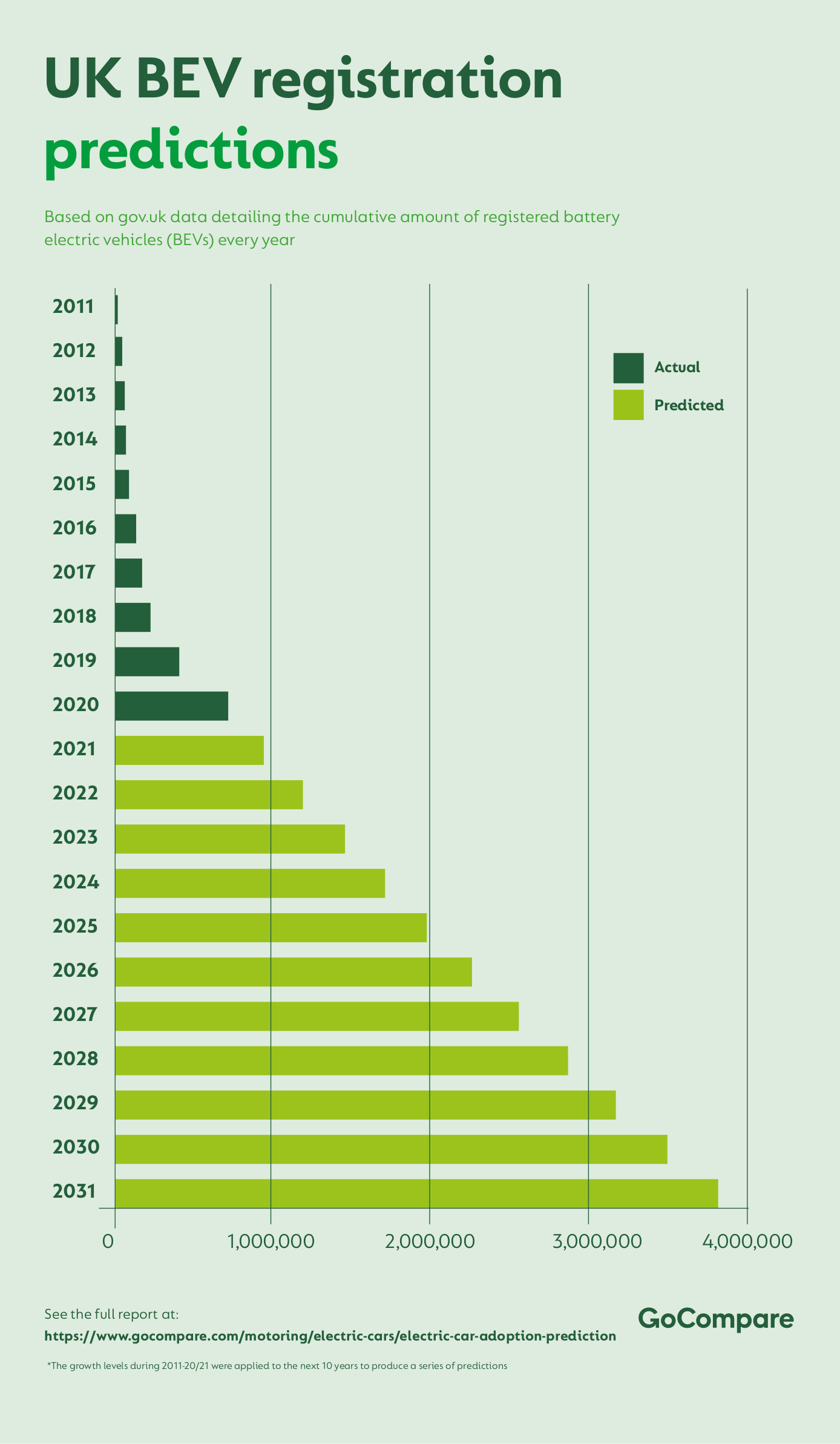 Based on our predictions, some places will see a particularly large surge in electric vehicles, none more so than Portsmouth. Over the next 10 years, the number of EV registrations in the south coast city will rise from 4,715 to 36,886 - an upswing of 682%. That’s the largest projected percentage of growth in the UK.


Middlesbrough won’t be too far behind. There were just 218 registered electric vehicles here in 2020, but this number will grow to 1,639 in 2030, which is an upsurge of 652%. The area with the third-largest percentage increase is Telford and Wrekin, where the number of EV registrations will inflate by 606%.

Will rapid charger availability improve by 2030?

Our predictions show that the availability of public rapid chargers will improve over the next 10 years - but not by much.

In 2020, the ratio of EVs to public rapid chargers was 205:1. Despite the government pledging over £1bn towards charging infrastructure, this ratio is estimated to remain high in 2030, with 197 electric vehicles per charger at the turn of the decade. Without more investment, the level of new charger installations will likely struggle to keep up with the increase in EV demand.

James McKemey, Head of Insights at Pod Point, spoke about the challenges catering for those who can’t charge at home and don’t have a work charger. He said:

Thankfully these drivers are actually in the minority, but they are the most challenging to cover.

Exactly how regular charging for this cohort of drivers is addressed remains to be seen, but we will likely tackle them through some combination of on-street charging, en-route charging, charging hubs (e.g. across UK rail), and bolstering the public charging ecosystem such that charging is available at every destination and they’re never left wanting.

Which areas will have the highest availability of rapid chargers? 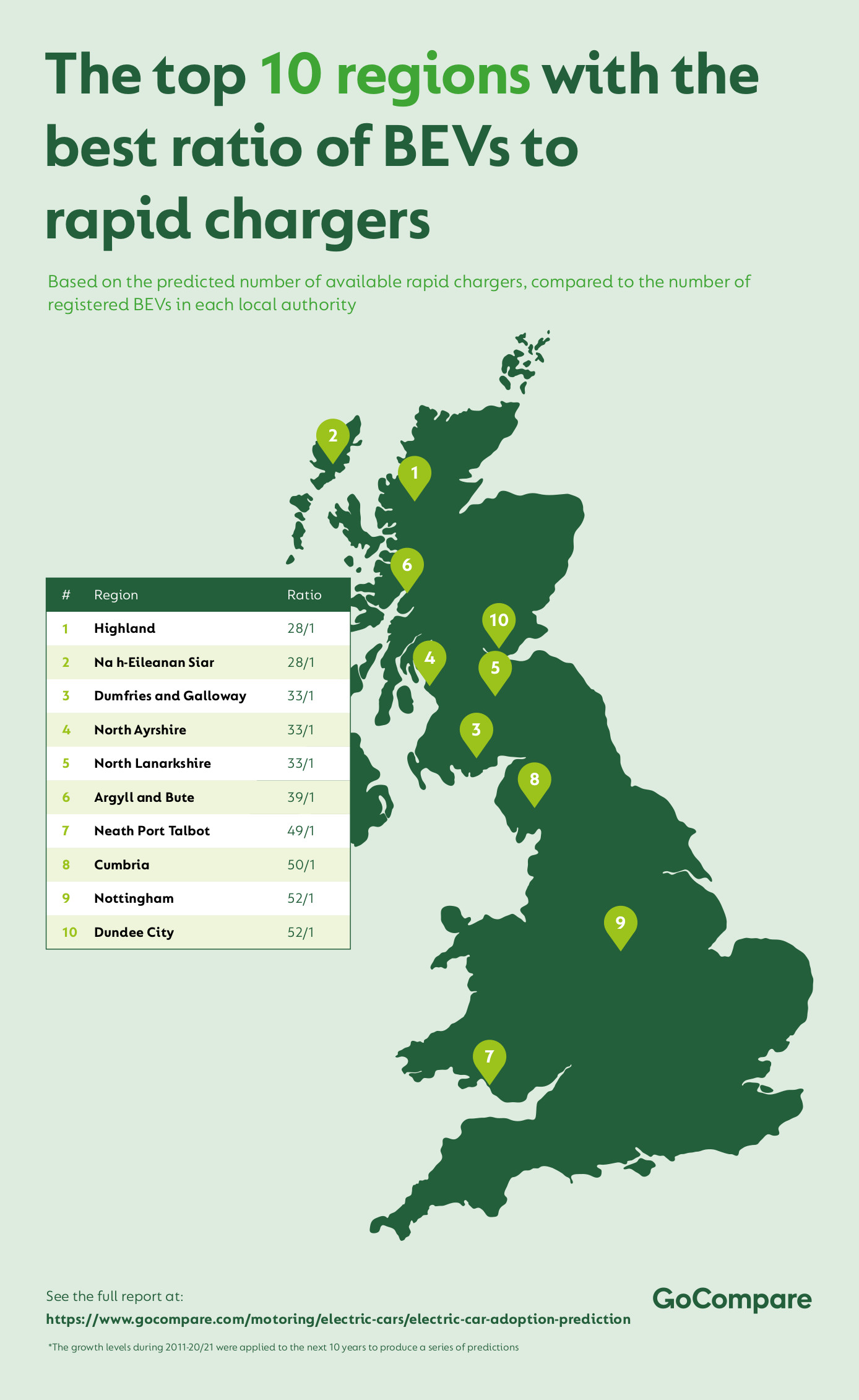 Although charger numbers may be a problem in 2030, our forecasts show that some parts of the UK will have better facilities than others.

Based on charger availability, Scotland will be the best place to own an EV in 2030. Seven out of the projected top 10 council areas for public rapid charger availability will be situated north of the border. This includes some of the country’s most remote locations.

Surprisingly, the Highlands and Na h-Eileanan Siar (the Outer Hebrides) will have the best ratio of electric cars to rapid chargers in the UK. Both of these areas will have 28 EVs per charger, which will be the lowest ratio in the nation.

North Ayrshire, North Lanarkshire and Dumfries and Galloway make up the rest of the top five. All of these areas will have a charger available for every 33 electric vehicles. Meanwhile, Argyll and Bute, alongside the Dundee City area, are also among the top 10, with ratios of 39:1 and 52:1 respectively.

Which areas will have the lowest availability of rapid chargers?

Although Portsmouth will see the highest increase in EV registrations over the next 10 years, our predictions show it may be one of the worst places in the UK to own an electric vehicle in 2030. Unless the current installation rate improves, there won’t be enough chargers available to support the accelerating uptake of EVs here.

For every public rapid charger in Portsmouth, there will be 2,927 EVs. This is the highest projected ratio of electric vehicles to rapid chargers in the UK and is almost twice as high as the next worst area - Bracknell Forest. Here, the ratio of chargers to EVs will be 1,464:1.

The third-worst area, with a ratio of 1,269:1, will be Armagh City, Banbridge and Craigavon district in Northern Ireland. These figures highlight that there will still be a significant disparity in rapid charger infrastructure across the UK in 10 years.

Because of this, before purchasing an EV, it may help to check how many chargers are installed at the places you often travel to. If availability is generally low where you live, you could also buy a home rapid charger with the vehicle, as these can be discounted with a government grant.

The figures on this page were calculated by reviewing relevant EV-related data from 2011-20/21. The growth levels during this period were then applied to the next 10 years to produce a series of predictions.

Therefore, our forecasts simply show how the UK’s electric vehicle landscape will look in 10 years if trends from the previous decade continue. They do not take into account external influences, such as the introduction of new laws or government schemes.

The term ‘chargers’ refers only to publicly available rapid chargers, meaning private and non-rapid chargers are not included in these projections. It also doesn’t take into account the number of unavailable chargers, such as those which are installed but offline.

EV registration figures were sourced directly from the Gov.uk website and data for charger availability was obtained from Zap-Map. All of these numbers are cumulative (rather than new sales/installations per year). Regional data is split by council/local authority area, not by county/region/town or city.

Data for the Windsor and Maidenhead area was discounted from our predictions, as our figures showed an abnormally high ratio of EVs per charger. This ratio may have been skewed by the large volume of attractions in the area (such as Legoland and Ascot Racecourse), some of which could have a private set of EVs and chargers. These vehicles wouldn’t be reliant upon public chargers, so it was deemed inappropriate to include figures for this area in our projections.

The prediction for the mass adoption of EVs is based on a 2020 study by Castrol. This found that mass adoption will occur in the UK when vehicles with a real-world range of over 283 miles per charge are available for £21,620.