How much does an MOT cost?

Find out how much an MOT costs and how to save money on your MOT with deals, discounts and preparation tips.

How much does an MOT cost?

How can I save on MOT fees?

In 2020, an estimated 7.8 million vehicles failed their MOT test. Many of these failures were caused by faults with tyres and visibility, as well as lamps, reflectors and electrical equipment.

Almost half (46.6%) of failed MOTs are caused by defects that could have been spotted by owners themselves. Yet, over a quarter (27%) of drivers recently admitted that they don’t do anything to prepare their car prior to its test. 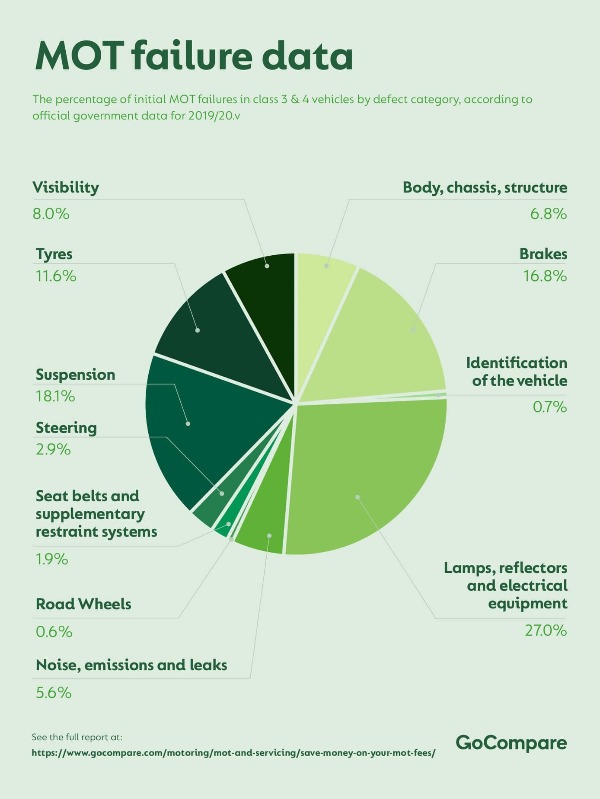 There are some easy pre-MOT checks you can do to give your vehicle the best chance of passing. For example:

Read our MOT checklist for more information, including useful videos to help you check your car’s tyres and bulbs.

2. Get your vehicle a service before the test

Spending money now to save later might sound odd, but a service can find and fix many problems before they become MOT fails.

Depending on whether you pick a full of partial service, what’s checked usually includes:

Parts that are worn or damaged will be replaced, and any fluids that are low will be topped up.

Some of these fixes – such as topping up the oil – will be included in the cost of the service, but bigger or unexpected repairs, like replacing the battery or dealing with corrosion, will cost extra.

3. Check for offers and deals

The government sets the maximum price limit for MOTs, but most garages charge less than this or have special offers, so it’s worth comparing a few places.

It’s not always best to go for the cheapest price though – if you can, use a garage that you know is reliable or somewhere that’s been recommended to you.

Alternatively, you can get an MOT at a council-run test centre – they have no reason to charge you for extra ‘necessary’ work. But some don’t offer a full repair service, so this might only be practical if you’re confident your vehicle will pass.

If your vehicle fails its MOT it’ll need repairs and a full or partial retest. You might not be able to drive it to another garage, so it’s important to pick the right one.

You can check the cost of most repairs online, to help you make sure you’re not overcharged.

How much does a MOT retest cost?

If your vehicle is repaired within 10 working days at the same place you had your MOT, you won’t need to pay anything for a partial retest. If you are unable to book another slot within the 10-day free retest window, you will have to pay for a second MOT.

If you take the vehicle away for repairs and get it back to the same centre within 10 working days you'll be charged the partial retest fee.

Our research indicates that 6.5% of vehicles that fail the initial MOT are unable to secure another test within the 10-day free retest period. As 46.6% of these are avoidable, this equates to £8.1m being spent on fees for preventable MOT retests.

What are my MOT test rights?

To avoid wasting time and money, it’s important to be aware of all the rules surrounding MOTs.

If your vehicle fails its first test, you can often leave it at the test centre while it’s repaired. This does mean that you would be without your car for up to 10 days, but, you won’t have to pay a fee for the second test.

If you choose to take your vehicle away to get it repaired instead, you can be charged a partial retest fee, even if you secure a slot within the 10-day period. So, you should do everything you can to make sure your car doesn’t fail on something you could have easily fixed for yourself.

Before you book your next MOT, take 10 minutes to check your car.

GoCompare’s motoring expert Ryan Fulthorpe said: “Our data shows that millions of MOT failures can be avoided by performing a series of basic checks before taking your car to the garage.

“It takes as little as 10 minutes to examine a car for simple defects like faulty light bulbs and flat tyres. Yet, over 2.6 million vehicles fail their test due to these kinds of issues every year, and many owners end up having to pay for a retest as a result. We would urge all motorists to inspect their vehicle ahead of time, as neglecting to do so could cost you around £48.”

Al Preston, co-founder of WhoCanFixMyCar.com, agrees that monitoring these issues is critical, not just for your MOT but for your own safety: “Drivers should stay on top of any noticeable issues all year round, rather than waiting for them to get picked up at the MOT, as some could well be safety-related.”

They went on to add that drivers will need to be prepared in order to secure a test: “The volume of MOTs and the resulting work will certainly put pressure on garage availability, so drivers will need to be organised. The sector managed the volumes relatively well last year, but most big businesses are expecting to be operating around capacity.”

Duncan McClure Fisher, CEO of MotorEasy, also spoke to us about the predicted rise in MOT bookings this September. “Thanks to the registration peak and the rollover from last year’s test extension, we are expecting to see a significant increase in the number of drivers looking to book their MOT this September.

“This is something that’s likely to continue for a few years, so it’s a good idea for vehicle owners to avoid any preventable failures or unnecessary testing. That means drivers should try to find and fix any obvious motor issues beforehand, to ensure they aren’t wasting time or money.

“Additionally, it wouldn’t hurt to book in advance next year; you can get your test up to 30 days before your car’s due date, and it won’t affect your next anniversary. Essentially, you’ll be getting an extra month of cover at no additional cost.”

Calculating the number of failures in 2020

The number of tests rectified at the MOT centre was then subtracted from the total number of failed tests, to find the estimated number of second tests needed. This figure corresponds to the number of drivers who would be at a higher risk of paying for another MOT.

In total, we estimate that £17.5m was spent on MOT retests last year. This was calculated using the average MOT price (£48.32), the potential number of second tests needed (5.5 million) and the estimated percentage of drivers who miss the 10-day window for a free retest (6.5%). The average MOT price and the percentage of drivers who miss the 10-day free retest period are based on responses from 10 MOT centres across the country.

We then broke down the amount spent on retests by the percentage of avoidable failures. We used GOV.UK data to find the percentage of failed tests caused by three categories - tyres (11.6%), visibility (8%), and lamps, reflectors and electrical equipment (27%). Each of these was classed as a preventable reason for failing, as they can be easily checked and repaired before a test.

All together, these categories account for 46.6% of all failures. Therefore, we took 46.6% of the total amount spent on second tests (£17.5m) to find how much avoidable MOT fails are costing UK motorists, which is £8.1m.

We sourced these statistics from a survey of April 2021. GoCompare used Maru/Blue to ask car owners “what do you do to prepare your car for its MOT?”

How to save money on car insurance

How to save money on car insurance

Check when your MOT is due

What to do after car accident

What to do after car accident