Using phones at the wheel

A loophole that allows drivers to take a picture, play a game or scroll through music whilst driving is being closed. All these activities could mean a fine and points from 25 March 2022.

It’s been a criminal offence to use a mobile phone to make a call or text while driving since March 2017, with a penalty of six points and a £200 fixed penalty notice. But from 25 March 2022 it’s illegal to even touch your phone while behind the wheel. Six points and a fine isn’t a short-term punishment - it could mean paying higher car insurance premiums for up to five years.

The law has been expanded to cover very specific mobile usage to avoid the previous loopholes that drivers were taking advantage of, these include:

But have those laws made any difference to drivers’ behaviour?

We find out if stronger laws around using your phone while driving enforced since 2017 have deterred users, reduced fines and minimised accidents. 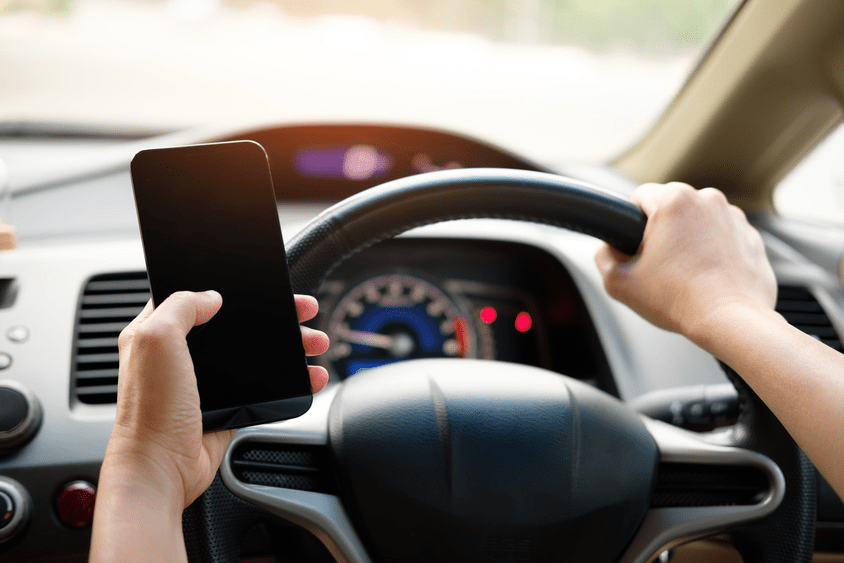 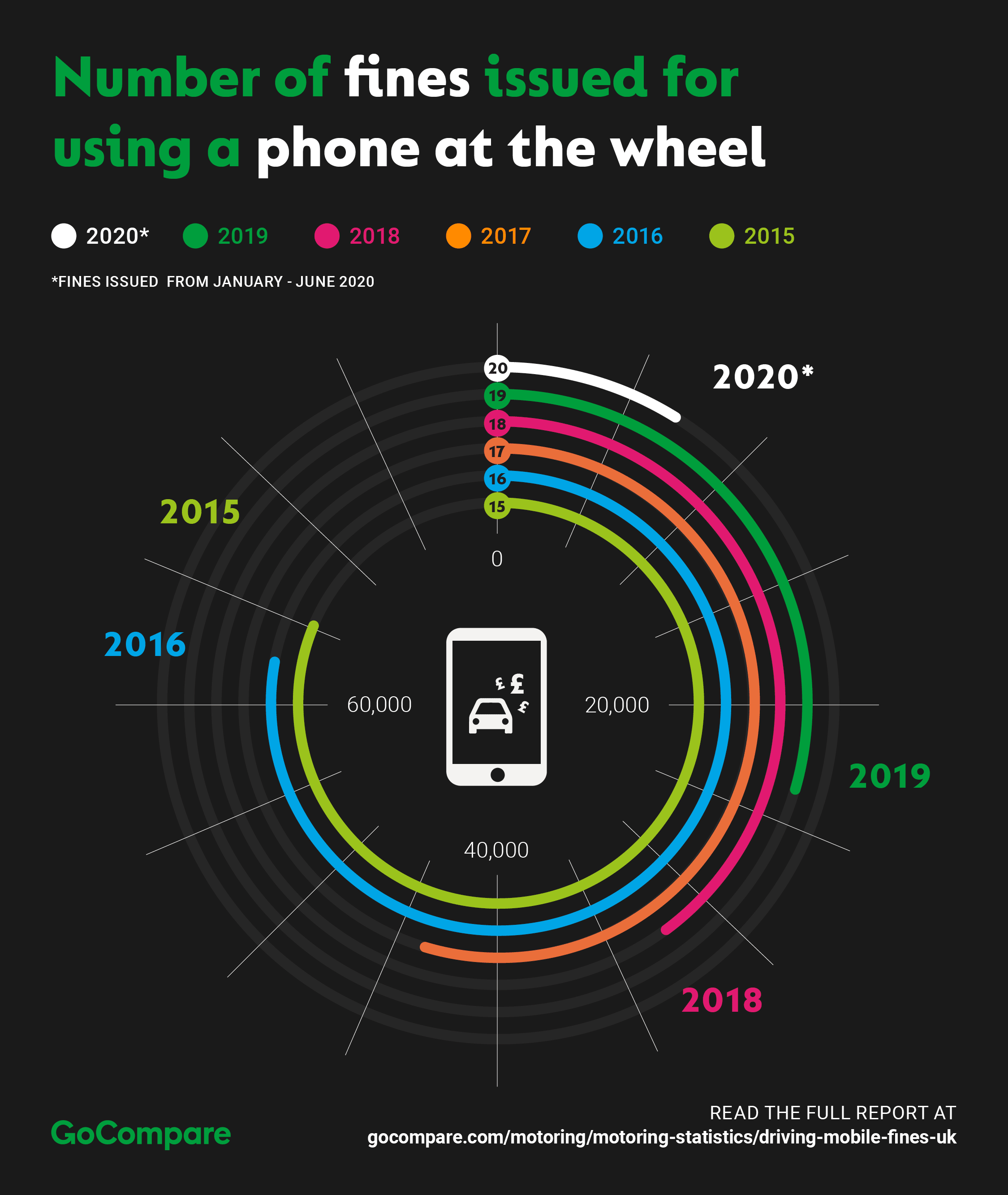 Since 2015, Britain’s drivers have been issued a total of £34,295,600 in fines for dialling while driving. But the number of fines looks to be decreasing each year.

With 6,644 fines submitted in 2020 so far, costing drivers £1,328,800 , it’ll be interesting to see if lockdown and increased home working causes further reductions due to less commuting.

Londoners the worst for using their phone at the wheel

The capital city is also the capital culprit when it comes to using a phone while driving, with metropolitan London racking up a huge £10,757,800 in fines between 2015 and October 2020. The higher population, and higher presence of police and CCTV cameras, mean London’s drivers are easier to catch and convict.

The cities fined for using their phone at the wheel 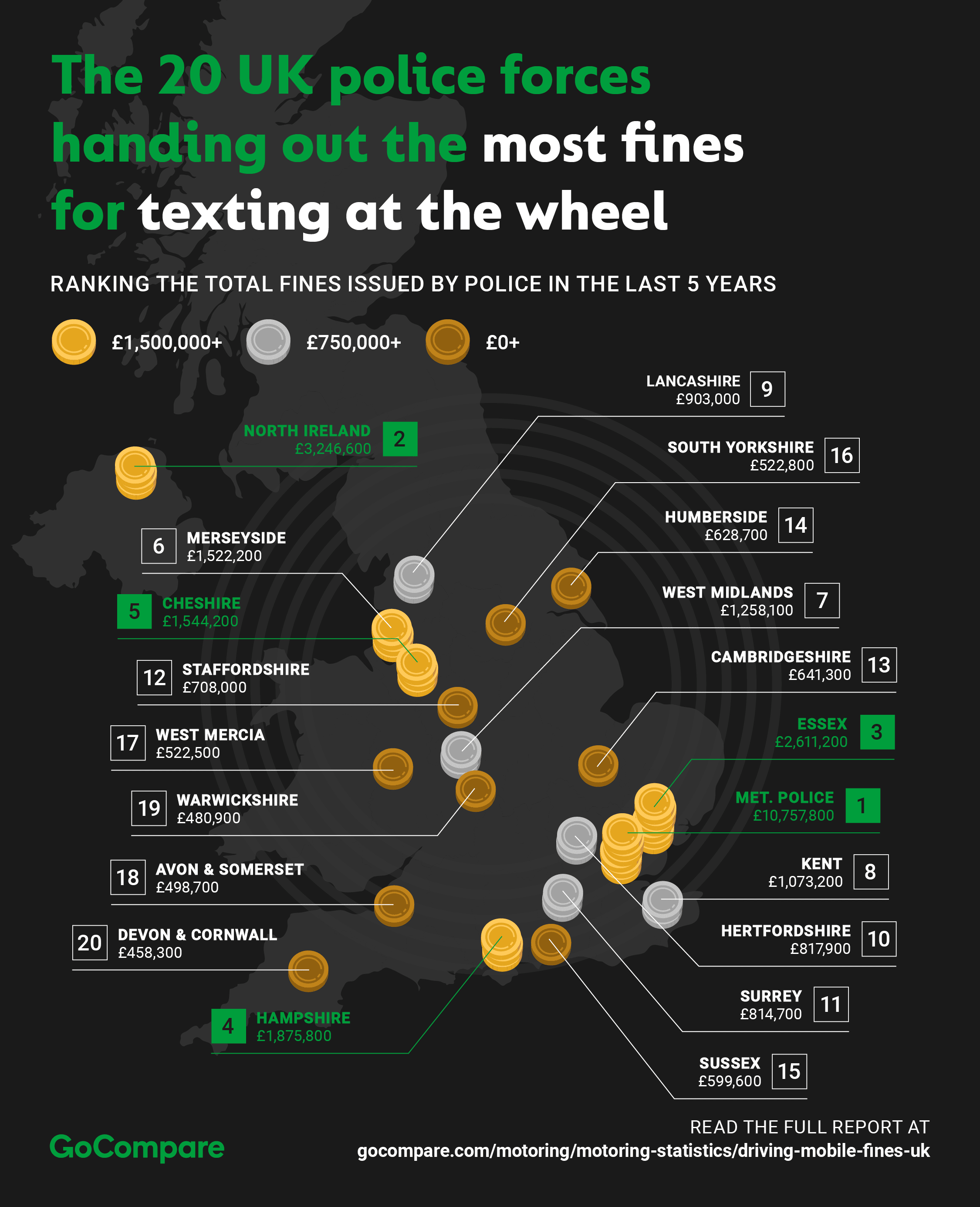 Interestingly, despite its boroughs being the worst offenders, the actual City of London is one of the most law-abiding places when it comes to drivers using their phones at the wheel, with £188,600 in fixed penalty notices submitted over the past five years. The place with the least fines is Derbyshire, with only £146,200 fines issued since 2015.

Although stronger laws in 2017 brought a reduction in fines, accidents didn’t see the same decline. There were 231 accidents relating to mobile phone use in 2015, while in 2019 that number went up to 264. This shows that people are still distracted by their phones, with the fear of missing out, constant updates, longer content and changing songs all still posing too much of a temptation to Britain’s motorists. 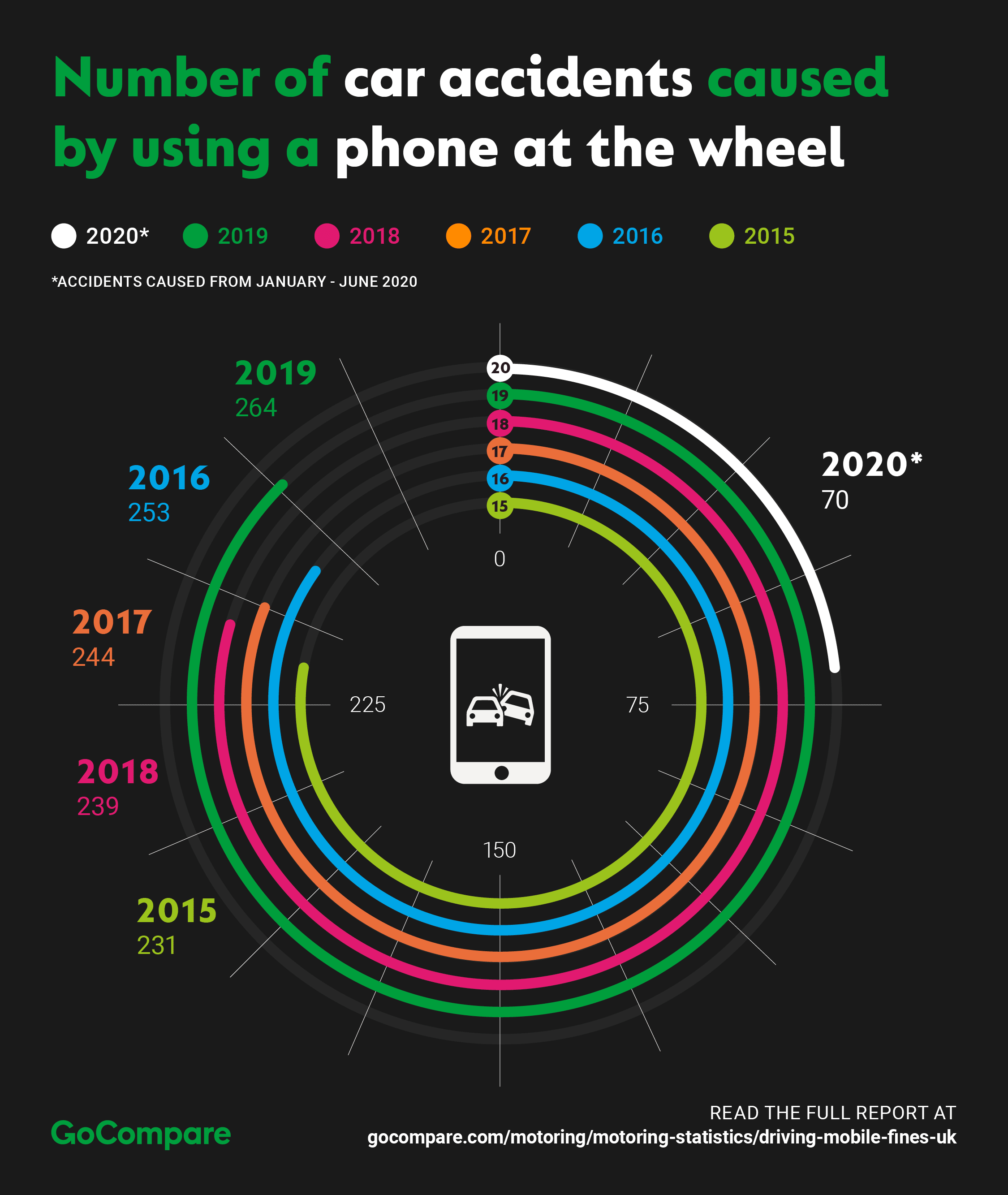 Thanks to the tougher measures introduced in March 2017, the third month in the year has become the most common for getting a fine for using your phone while driving with 24,455 given out in the past five years. December, with all its festive distraction, takes second place with 21,392. 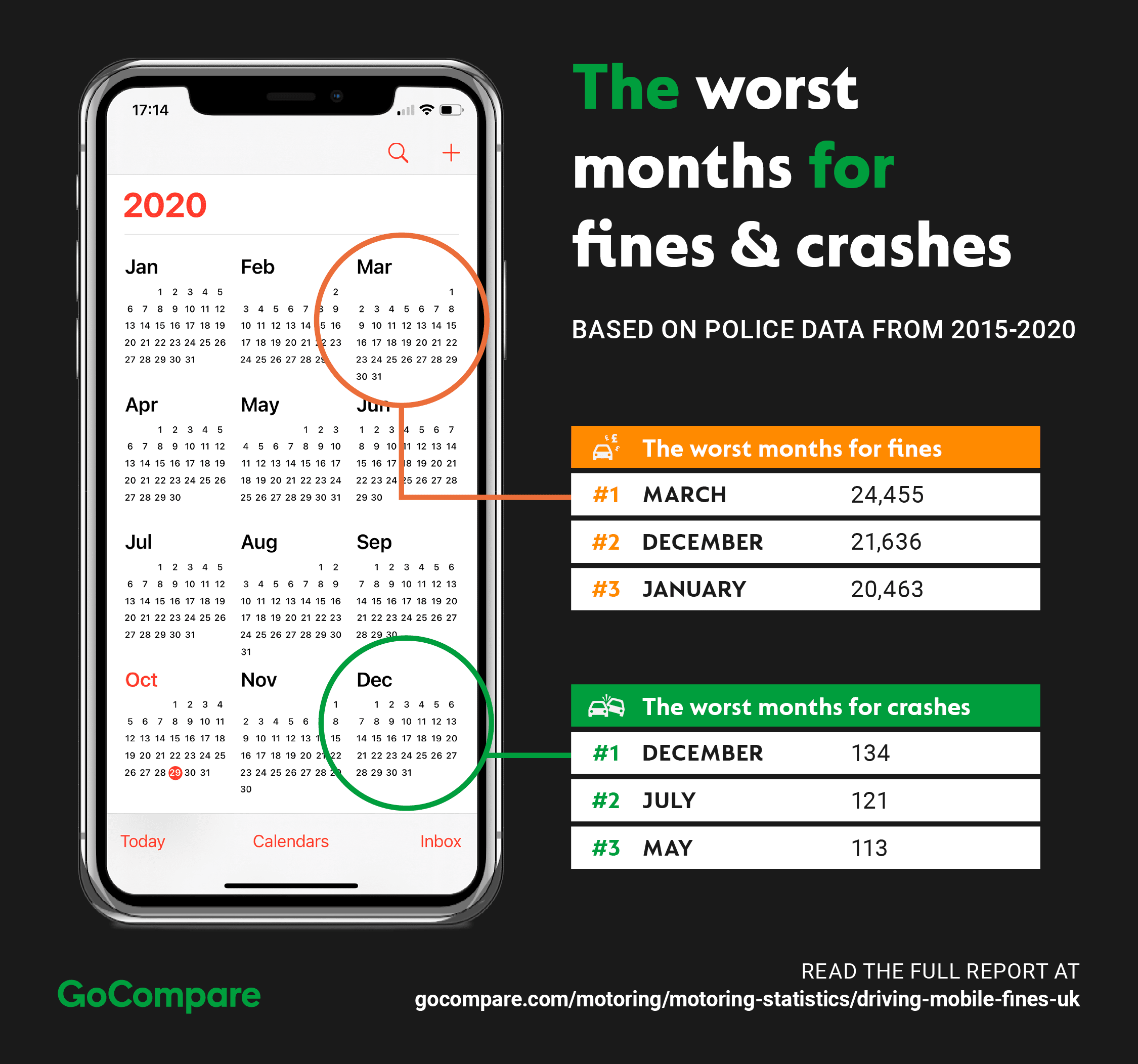 Picking up your phone while driving to become illegal

The restrictions on using smartphones while driving have been tightened as of 25 March 2022, with the goal of reducing the various ways phones can distract you during your journey.

By making it illegal to even pick up your phone, the number of fines issued may increase initially. However, longer term, this law change could reduce the number of motoring accidents associated with mobile phone use.

Although the punishment for mobile phone usage while driving will remain at six penalty points and a £200 fine, the longer-term impact on your car insurance and the risk you pose to others is another powerful deterrent.

Is reading that message really worth it?

Using freedom of information requests we found out the number of police fines that have been issued and the number of accidents caused by using a mobile phone at the wheel. We issued Freedom of Information requests to police constabularies across the UK. These results feature responses from 32 constabularies for fines and 22 for accidents. All data collected for the number of police fines and number of accidents caused have been collated over the past 5 years between January 2015 and September 2020. Fines and accidents attributed to accidents are uniform as defined by UK Police Incident Reports.

You can view the full data sheet here.