Smart motorways: Has the nation been educated on how to use them?

As smart motorways begin to make up more of the UK’s roads, many are concerned about their safety. Can more be done to educate the public on how they work or are they simply less safe than their traditional counterparts? 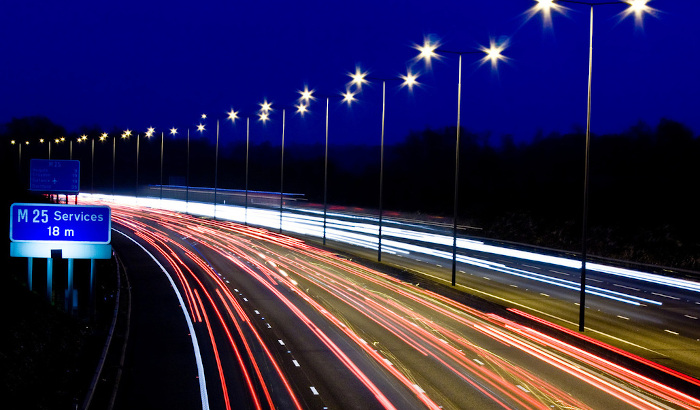 Smart motorways have dominated UK news headlines in recent years, as many within the general public, along with politicians and motoring organisations, believe they are a safety hazard.

In the interest of public safety, we launched a study to try and decipher why smart motorways are so distrusted. Our research sought to understand drivers’ primary issues with the road system, in order to gauge what can be done to protect their safety going forward.

What exactly is a smart motorway?

Simply put, smart motorways are designed to ease congestion and allow more drivers onto the road using certain traffic management practices. Most often, the motorway system is either a ‘dynamic hard shoulder (DHS)’ scheme or an ‘all-lane-running (ALR)’ scheme, which is the current standard.

On an ALR motorway, lane one (the converted hard shoulder) is shut to motorists if a vehicle breaks down or is in an accident. Stationary cars are tracked by CCTV cameras, or more recently, a new radar technology system. Variable speed limits are also implemented in the other lanes if an incident occurs, or depending on traffic conditions.

There are around 375 miles of smart motorway in England, and another 300 miles may be implemented before 2025. Yet, when asked for their opinions on the roads, many drivers weren’t happy with the current system.

Over half of the road users we asked did not think that moving to smart motorways was a positive change. In fact, 39% said they disliked the idea of smart motorways altogether, and 50% of drivers admitted they didn’t like the idea of family and friends driving on them.

Interestingly, one of the elements motorists disliked the most was the dynamic hard shoulder. A huge 67% of drivers cited this as a reason for their disfavour of the roads, and over a quarter (26%) said it was their most disliked feature.

On the topic of DHS motorways, National Highways states: “We know that this type of motorway has the potential to cause confusion for drivers because the hard shoulder is sometimes in use for traffic and sometimes not.”[2]

To combat this issue, the government-owned company is converting hard shoulders into permanently running lanes (ALR motorways). However, it’s unlikely that this will improve the public’s view of them altogether, as 26% of the motorists we asked disliked either the variable speed limits or emergency refuge areas the most. 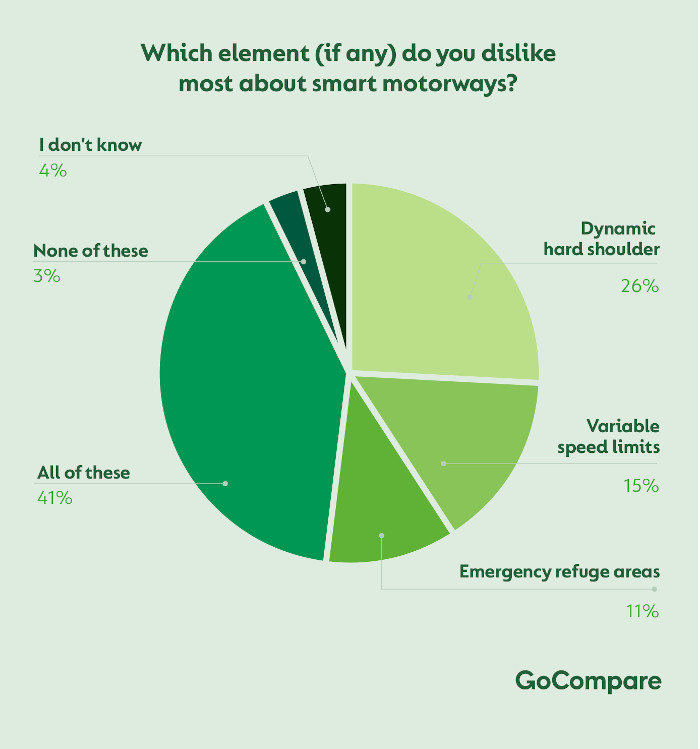 Some road users are even avoiding smart motorways completely, with 31% saying they would not drive on one. This figure rose to its highest (40%) for motorists aged 65 and over, but surprisingly, remained high among the youngest generation of drivers, at 39% of those aged 18 to 24.

Even more worryingly, a massive 38% of 18-24 year-olds have planned a drive that specifically excludes smart motorways in the past. It appears that many motorists would rather choose a different route because they feel unsure and unconfident on these roads.

Shockingly, although smart motorways have made up parts of British roads for 15 years, almost half of the drivers we asked were unaware of what to do if they were to break down on one. Not knowing what steps to take in this situation could result in critical consequences.

The lack of understanding surrounding the road system was made apparent in our research. In fact, 52% of respondents were not aware that you can't drive in a lane marked with a red ‘X’ or lanes that don’t display a speed limit. Not abiding by this important regulation could cause a serious accident, as motorists run the risk of colliding with a stationary vehicle.

A staggering 76% of the 18 to 24-year-olds asked were unaware that you must keep to the speed limit displayed on the overhead gantries when driving on a smart motorway. This fell to just 26% of those aged 65 and over, suggesting that older generations of road users are more aware of the rules.

Aside from the obvious dangers involved when driving over the speed limit, those caught speeding can rack up heavy fines, licence points and even driving bans.

The pattern observed among young drivers raises concerns over whether driver training is extensive enough when it comes to smart motorways. Nevertheless, the figures are still significant across each age group, which suggests that more education is needed for all road users.

In London, where there are 11 smart motorways, 24% of motorists admitted to disliking them. This rose to 38% of those in Yorkshire, an area that has just three, suggesting that perhaps people need to get used to the roads before they feel comfortable driving on them. However, further research shows this isn’t always the case.

Our survey results found that 41% of London’s motorists were unaware of what to do if they break down on a smart motorway, which is hardly distinguishable from those in Yorkshire (at 42%). This shows that the lack of education on how to safely use smart motorways isn’t affected by having more of them nearby.

What should you do if you break down on a smart motorway?

If you need to stop on a motorway with no hard shoulder, the advice from National Highways[3] is as follows:

We asked Ian McIntosh, CEO of RED Driving School, for his opinion on the lack of awareness surrounding smart motorways. He said:

“It’s not surprising that such a large proportion of drivers are unaware of what to do when they break down on the motorway. The rollout of smart motorways could and should have been smoother, with a concerted effort to educate all drivers on what to do when they find themselves breaking down.

“While we can’t change what has happened in the past, there is an urgent need to deliver educational training to drivers so that they feel comfortable and confident when driving on smart motorways. This will not only support a driver in a broken-down vehicle but all drivers who happen to be on a smart motorway in the future.”

Since young drivers appear to be less aware of smart motorways regulations, we were keen to discuss what could be done to ensure new road users are properly educated.

“We believe more can be done to make sure learners fully understand smart motorways before they pass their practical exam. It would be positive in future to include smart motorways as part of the hazard awareness theory test section of the exam. This would allow for additional understanding and education of future drivers”, McIntosh added.

To try and examine the safety of ALR smart motorways, GoCompare contacted National Highways with a Freedom of Information request outlining the casualties on smart motorways in comparison to traditional motorways. Unfortunately, our request was denied and the response was as follows:

“We can confirm that the requested information is held by National Highways. [...] The information you requested is scheduled [to] be published in Spring 2022 as part of our Smart Motorways stocktake second-year progress report.”

Data published by the Department for Transport [4] on smart motorways for the period 2015-18 found that while smart motorways carried just 10.7% of motorway traffic, 11.4% of serious incidents occurred on them.

[1] From 8-11 October 2021, an online survey of 2,060 randomly selected Great British adults was executed by Maru/Blue. For comparison purposes, a probability sample of this size has an estimated margin of error (which measures sampling variability) of +/- 2.1%.

The results have been weighted by age, gender, region and social grade to match the population, according to Census data. This is to ensure the sample is representative of the entire adult population of Great Britain. Discrepancies in or between totals are due to rounding.

[2] This quote was sourced from National Highways’ online update on the country’s all lane running upgrade.

[3] Our breakdown advice was sourced from National Highways, with all information correct at the time of writing.