Erm, we're still getting lots of enquiries about our 2013 APRIL FOOL joke (below). Hope you enjoyed it, but we're afraid telecatics isn't a reality. At least not yet...

Why not consider the innovative new telecatics pet insurance policy that can save you money on cat insurance based on your pet's behaviour?

Gocompare.com has today[1] added a new pet insurance product to its panel that has the potential to revolutionise the market and reduce premiums for cat owners by up to 50%.

The new product, known as CatMap, utilises technology developed for telematics car insurance policies, where driver behaviour is monitored by sophisticated GPS transponders fitted to the car with the information uploaded in real-time to the insurer (see the CatMap dashboard).

CatMap, which has been jointly developed by Gocompare.com and American company Feline Technologies Incorporated, uses a micro-tracking device small enough to be attached to a cat's collar and powered by a tiny lithium battery, giving a working life of approximately nine years.

The whole unit is enclosed in a titanium 'black-box recorder' type capsule designed to withstand a serious accident.

As with the equivalent car insurance products, CatMap premiums are calculated based on the behaviour of the insured cat.

More sedentary cats could potentially benefit from premiums up to 50% lower than adventurous and higher-risk cats covered under a standard pet insurance policy.

The key factors which will determine the cat's premiums are:

Another benefit of the new CatMap product is the ability to track, in real-time, a cat's exact whereabouts.

Using the specially designed CatMap dashboard, which is available as a smartphone or tablet app and can be accessed online, owners will be able to see on their screen exactly where there beloved pet is at any time.

This means no more worries for pet owners when their cat disappears for days on end.

Paul Banks was one of a small number of owners whose cats have taken part in the development of the new product. His cat, Rooney, was chosen for the trial because system designers thought his behaviour would fully test CatMap's features.

"We saw an advert in an email from Gocompare.com about the trial and we thought it would be perfect for Rooney," said Mr Banks.

"He's always going out late at night and not coming back for days. He's cost us a few pounds in vet bills and many sleepless nights.

"What we found out from CatMap was amazing! Using the map feature we could see that Rooney was spending a lot of time in one place on the high street, which turned out to be a kebab shop.

"He had to scale a high wall and cross several busy roads to get there. As we thought, though, Rooney wouldn't save much money with CatMap as he just takes too many risks."

Gocompare.com pet insurance expert Ben Wilson said of the new product: "If you own a certain kind of cat this policy could be a revelation, both in terms of saving on your pet insurance premiums but also finding out what your cat gets up to.

"For too long owners of responsible, home-loving cats have been subsidising the insurance premiums of more reckless felines with lifestyles that really test the 'nine lives' adage to the limit. Telecatics policies are much fairer for everyone.

"Although in its infancy for use in a pet insurance application, the technology for these new policies will develop further.

"We listened to concerns about CatMap being an invasion of the pet's privacy, but decided that the benefits of potentially lower premiums and knowing much more about your cat's activities far outweighed any downside.

"We believe owners will increasingly consider products like CatMap to help them bring down the cost of protecting their pet." 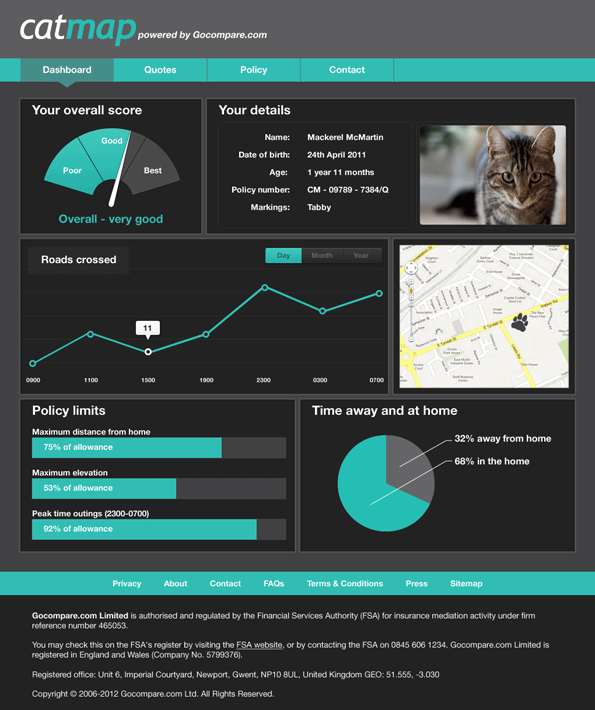