Our data reveals the most popular pets of the Covid pandemic, with over half a million insurance quotes being taken out since lockdown began. 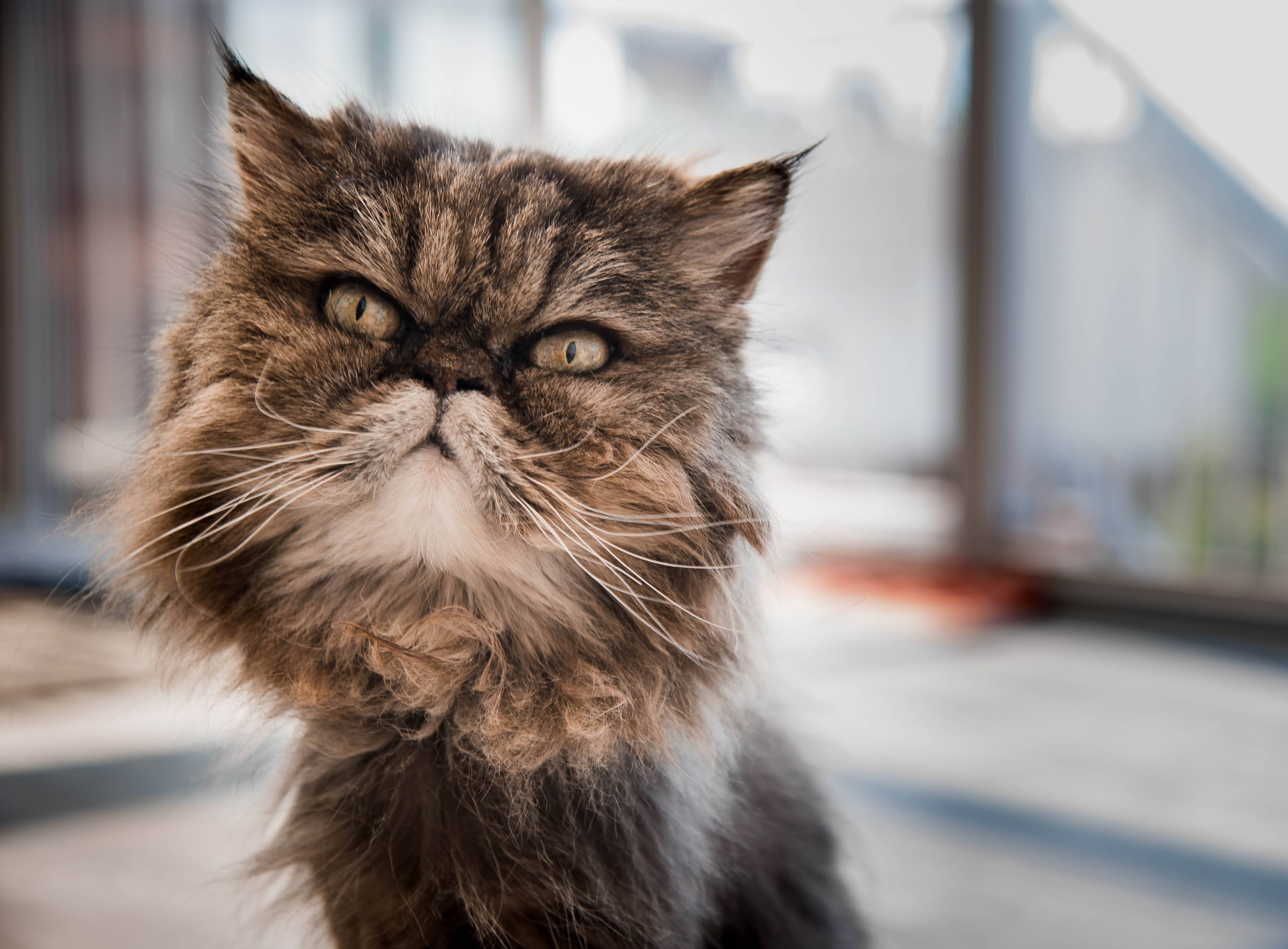 The price of pandemic pets

Covid-19 has seen many things take a surprising spotlight. Walking, Zoom parties and virtual quizzes all shot up out of nowhere to be the world’s favourite activities, as global lockdowns stopped us doing pretty much everything else.

But there’s one trend that’s fluffier than all the others...

The increased popularity of pets.

With many people isolating at home away from their friends and family, pets have been a source of some much-needed company, as well as a good excuse to keep up with exercise. We’ve provided a huge 580,474 quotes for pet insurance since September 2019, giving us access to some very cute sets of data.

From pet breeds to pet names, our report into pandemic pet popularity is sure to get tails wagging.

French bulldogs are the most popular Covid dog

Since the UK officially shut down on 23 March 2020, no dog has proved more popular than the French bulldog. Throughout the national lockdowns, 9,324 insurance quotes have been issued for the flat-faced pooch, with smaller dogs proving a big attraction for the country’s pet lovers.

In second place is the ever popular labrador retriever. This fun-loving, energy-filled breed has been searched for 7,255 times during Covid, acting as the perfect partner for the daily outside walk or countryside ramble.

Completing the top three is the cocker spaniel. With ears almost the size of the rest of its body, the cocker spaniel started out as a dog designed for hunting game. Now it’s much more at home on walks through the park, with people searching for it 5,269 times as they look for a pandemic partner.

The top dogs of the Covid pandemic

Moggies searched for more than any other pet

When it comes to the top of the pandemic pet pops, nothing can beat the catch-all term for mixed-breed cats. We’ve seen 12,972 searches for moggie insurance since September 2019, as people flocked to add the friendly feline to their family.

The low-maintenance moggie has proved the perfect companion for new cat owners. Give them toys to play with, a good supply of their favourite food and a sunny spot to lounge in, and they’ll be more than happy.

In second place of the most popular cats is the ragdoll. This docile breed first appeared back in the 1960s, and has since gone on to be loved across America and the UK due to its affectionate nature. Any ragdoll owner will know how they like to follow you from room to room, and this friendly attitude has seen them searched for 704 times.

With 559 insurance searches, the bengal cat takes third place. While it might look like a small leopard, it’s much friendlier than its wild cousin, and loves nothing more than playing with its people.

The top cats of Covid

Despite the built-up, urban nature of the capital city, Londoners have gone goo-goo over the German shepherd. The dog, which loves nothing more than being active, saw more searches than any other breed in the city, while bengal cats took first place for felines.

In the north of the country, Leeds has been crazy for cocker spaniels. Although cockers are traditionally a countryside dog, the Yorkshire city has gone back to its roots as people clamoured to bring a cocker home. Moggies proved Leeds’ most popular cat, with Yorkshire meows ringing in the city’s ears.

In Cardiff, French bulldogs and siamese cats took home top spot. These two exotic breeds have proved popular in the UK as they don’t crave too much exercise and can do well in built-up or indoor environments. 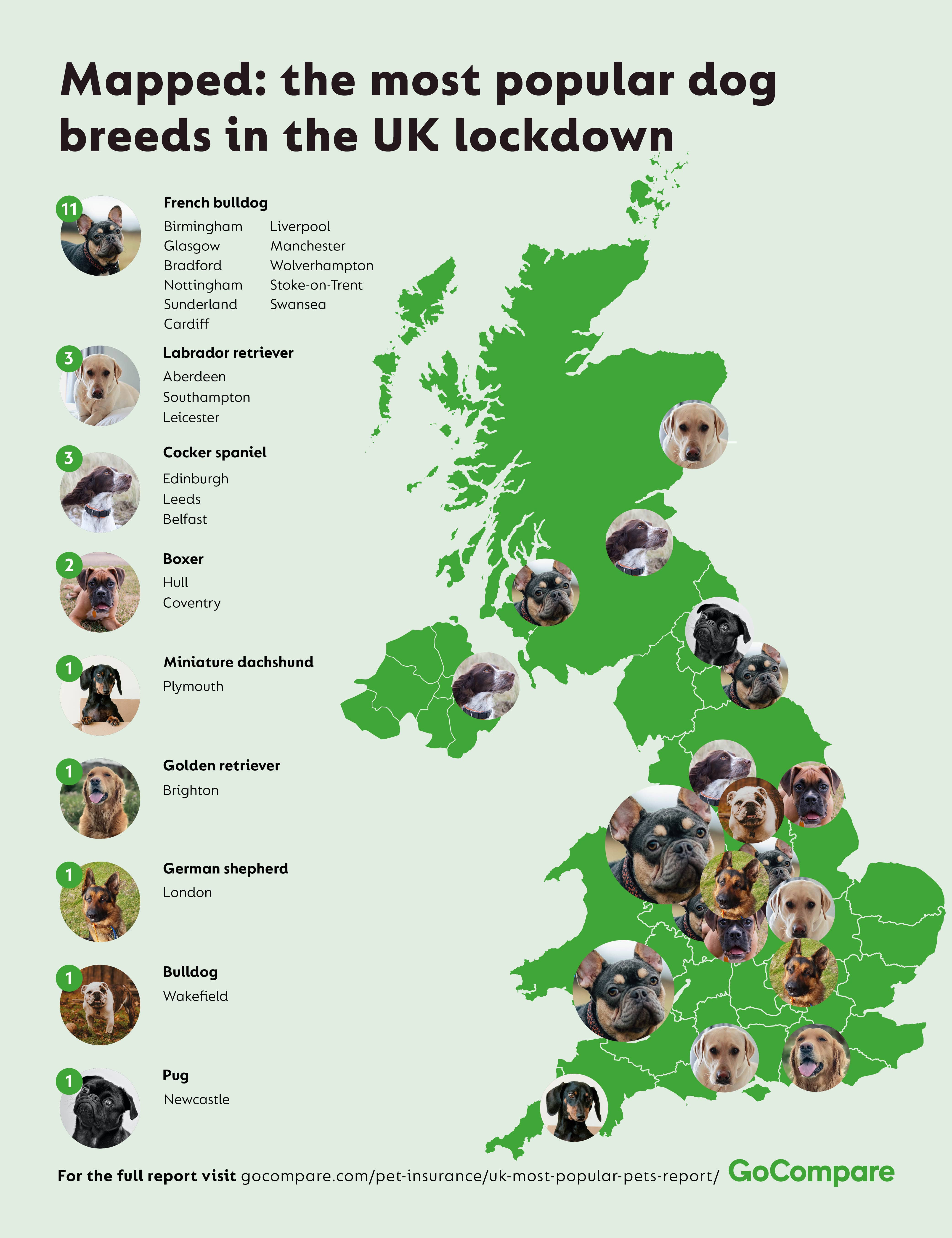 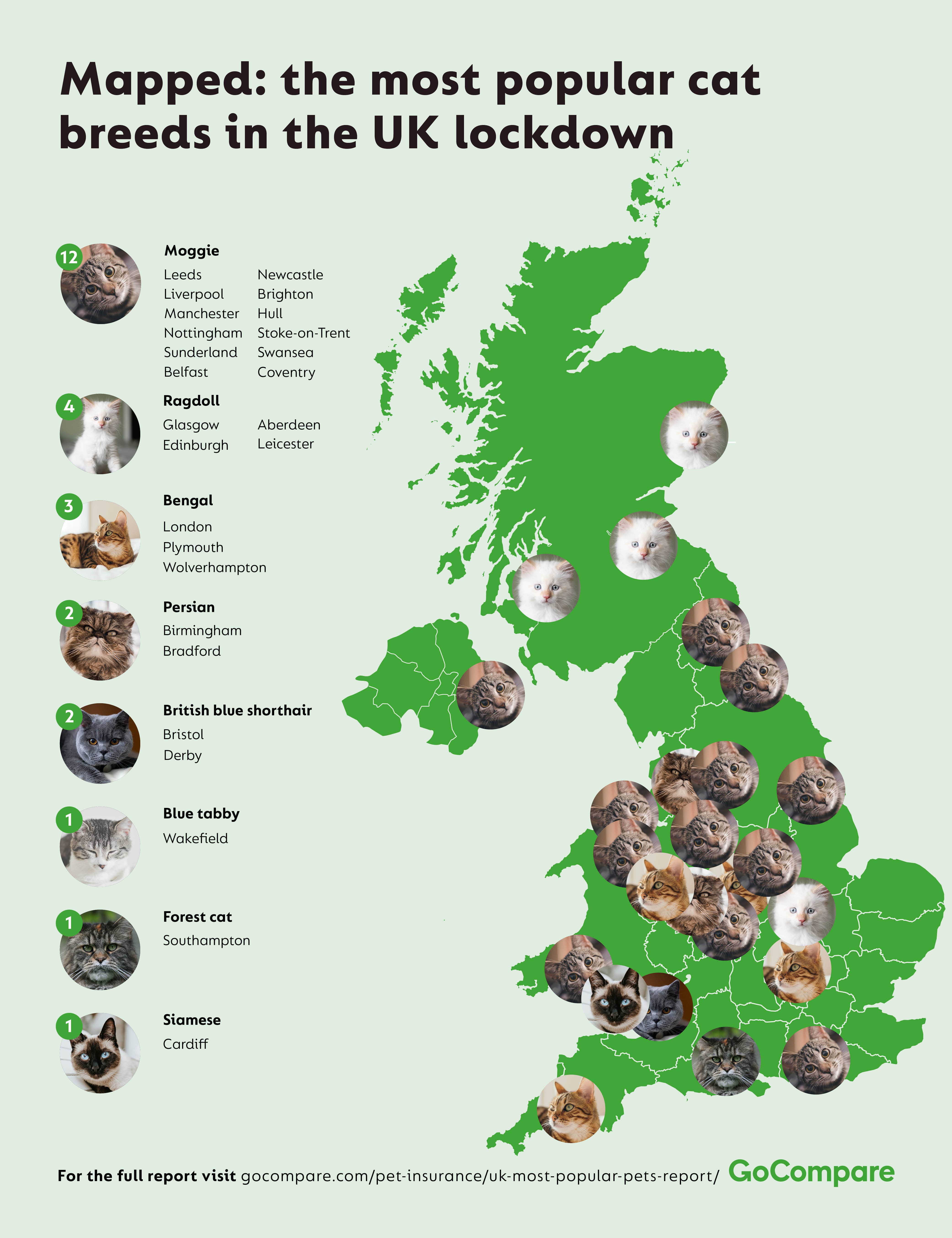 Due to the surge in pet popularity, prices have gone up too. With everyone keen to get their hands on some cuddly company, pet breeders have jumped at the chance to profit from their animals.

One dog in particular has seen their value go through the roof. The Brazillian dogo, a muscular working dog from South America, only cost £500 before lockdown. If you want to bring one home now, you’re looking at nearer £2,750, with the rare breed packing a beefy price tag to match.

Retrievers have also seen a huge increase in value. Back in 2019, one could have been your best friend for only £450, while now you’ll need £2,500 to buy one’s company. 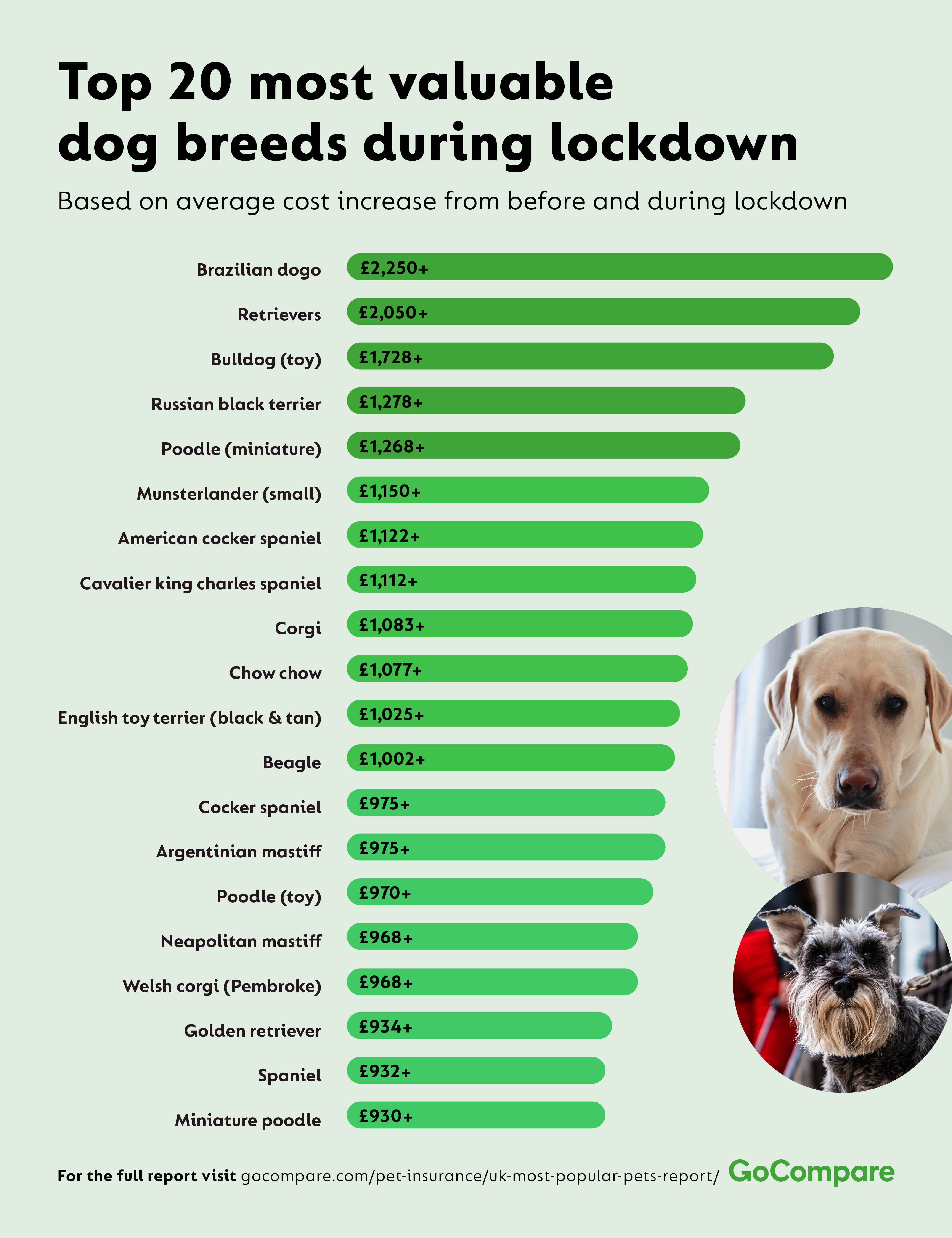 Dogs aren’t the only pet to have gone up in price. Cats have also seen a boom, with the black longhair’s average value going up by £687 to a hefty £887.

The domestic longhair has followed suit. Back in pre-pandemic times, the popular breed was as cheap as £42.40. Now, however, they’ll command a price tag of £662 as demand increases. 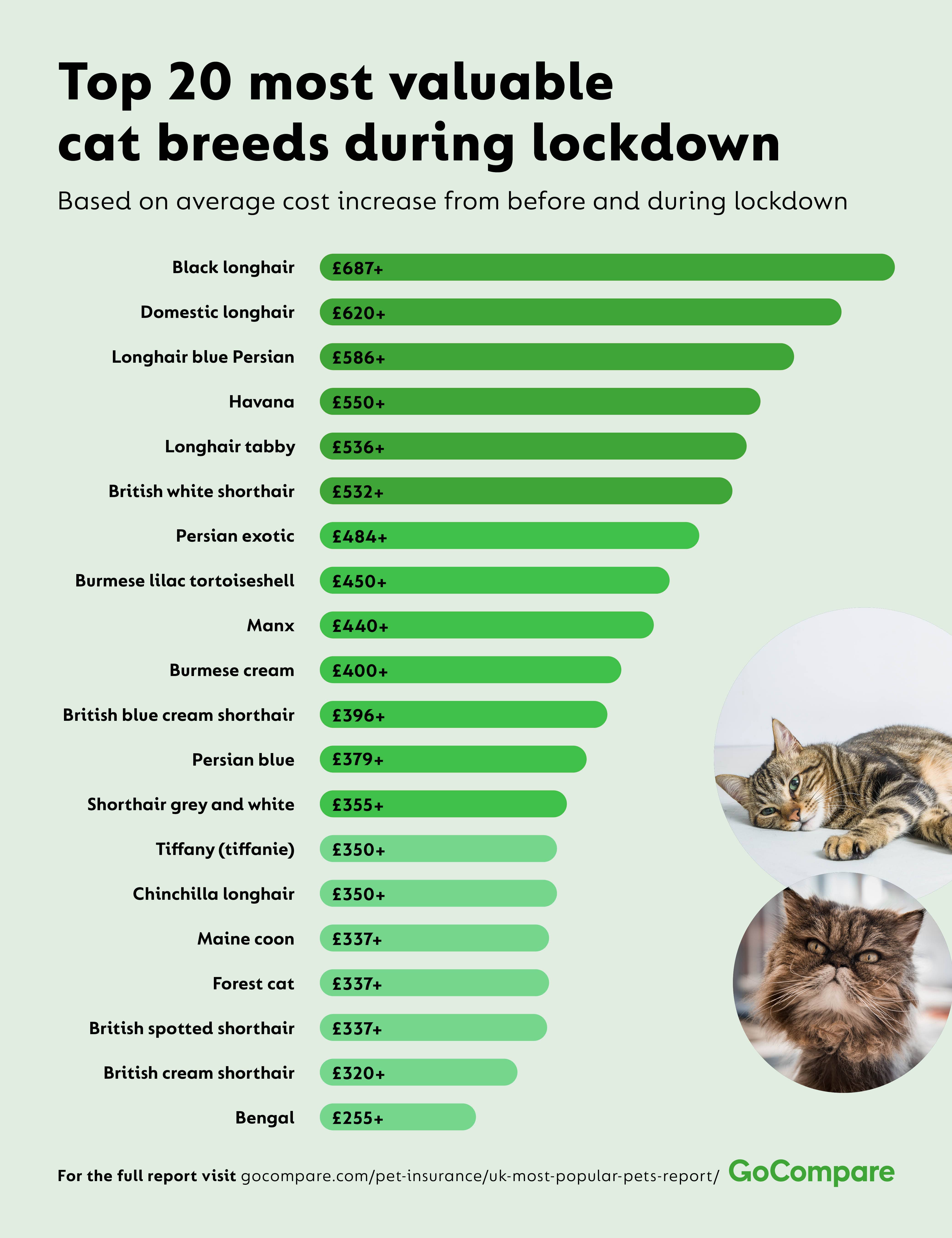 While these prices might seem extortionate, it's not entirely driven by unscrupulous puppy farmers out to make a fast buck. Reputable breeders will want to make sure their animals go to good homes who'll continue to love them after life eventually goes back to normal. Increasing prices discourages new pet parents from buying on a whim.

It’s all in a name 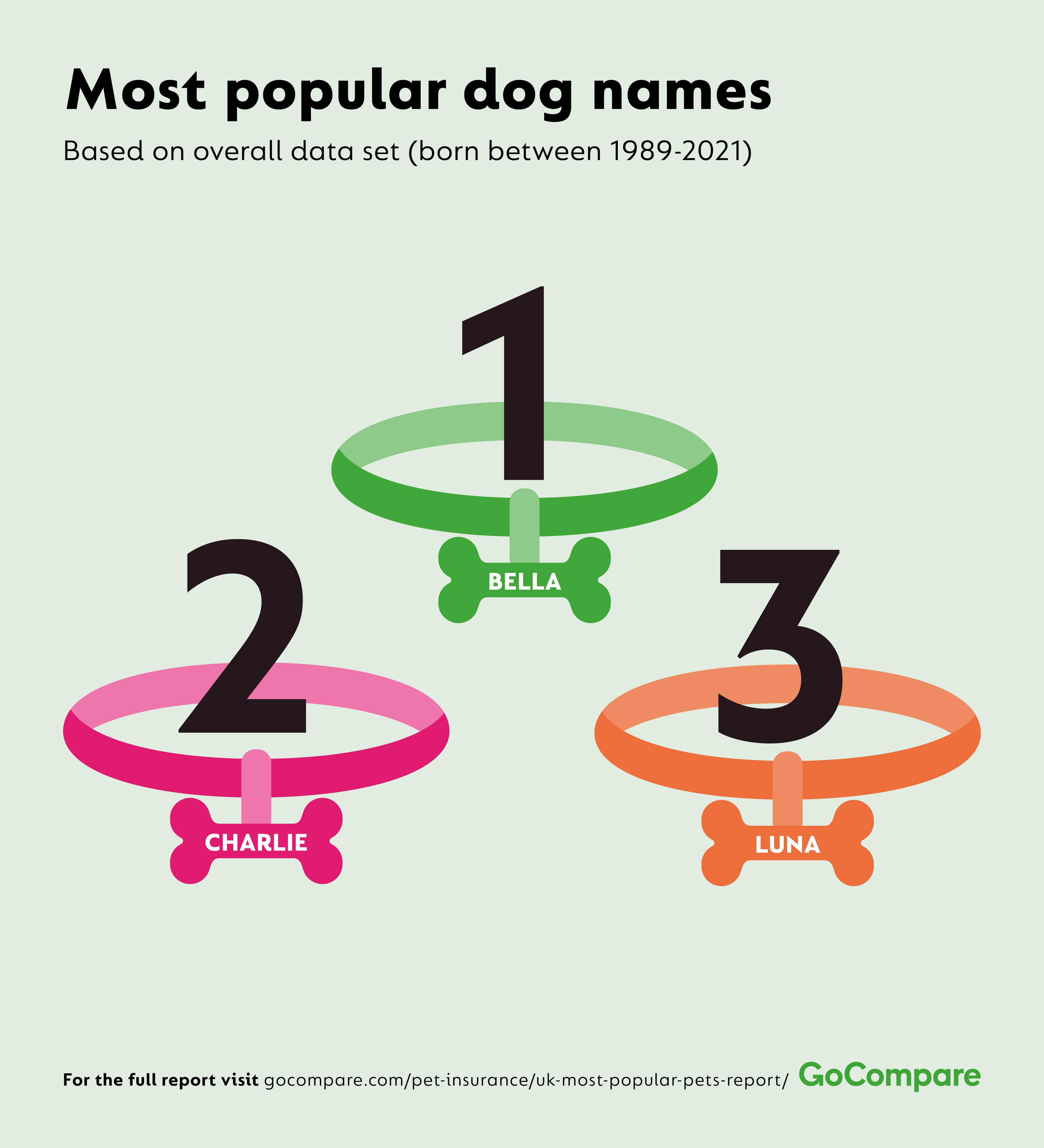 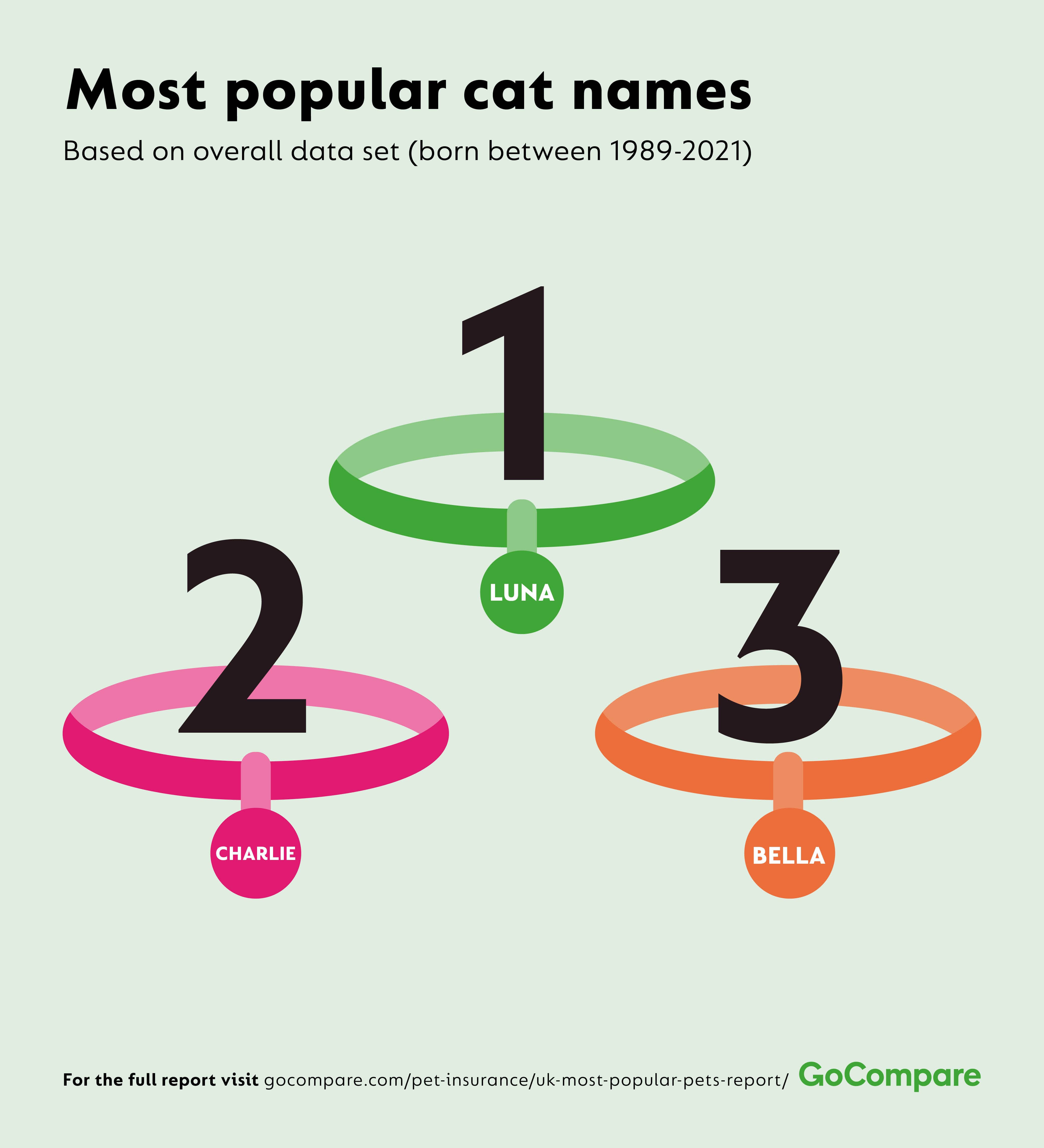 Charlie has proved a popular name for dogs for decades. As far back as the 1990s it was making top spot, while Luna has been leading the way for cats since 2010. Previous winners have included Jax in the 2000s and Poppy in the 90s. 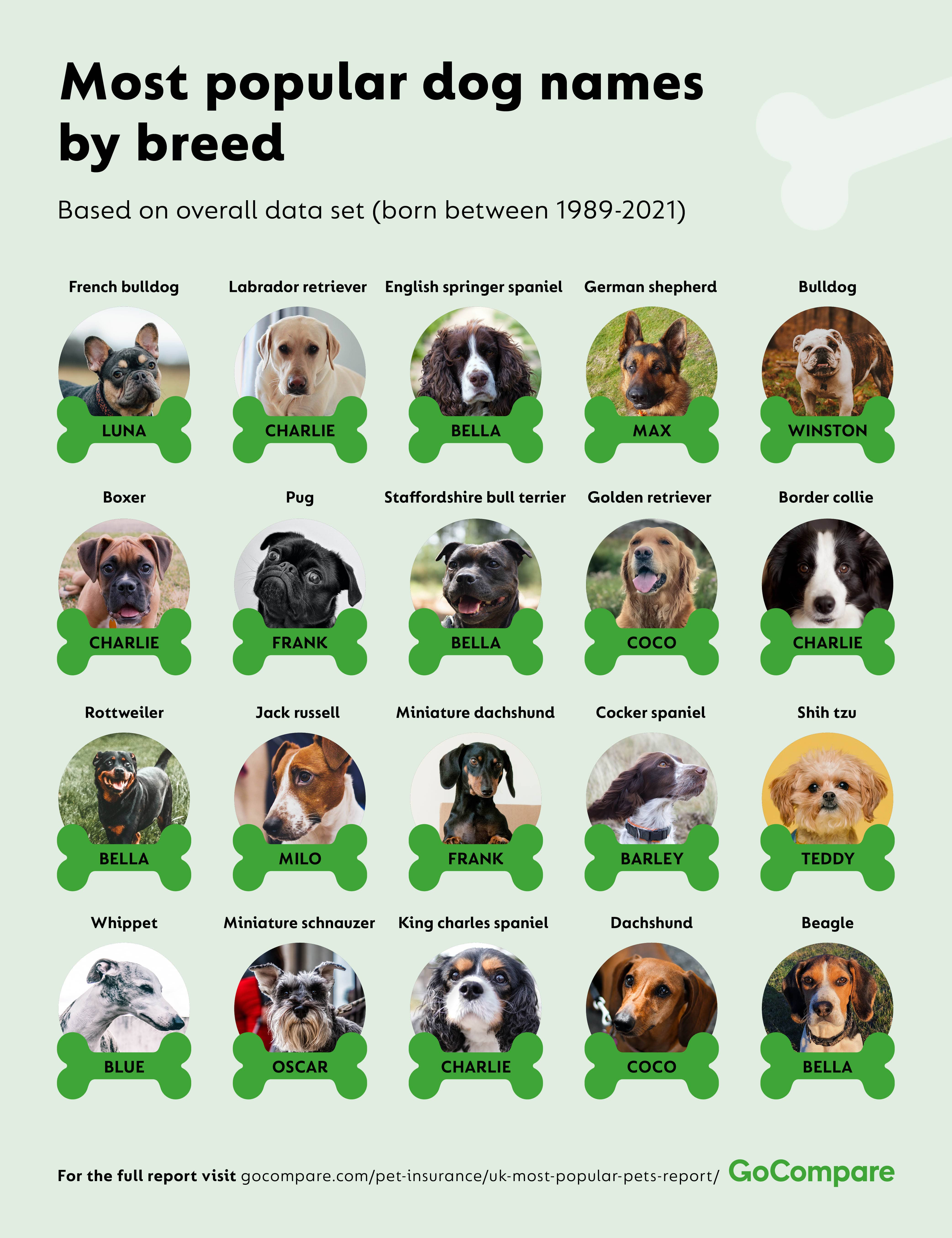 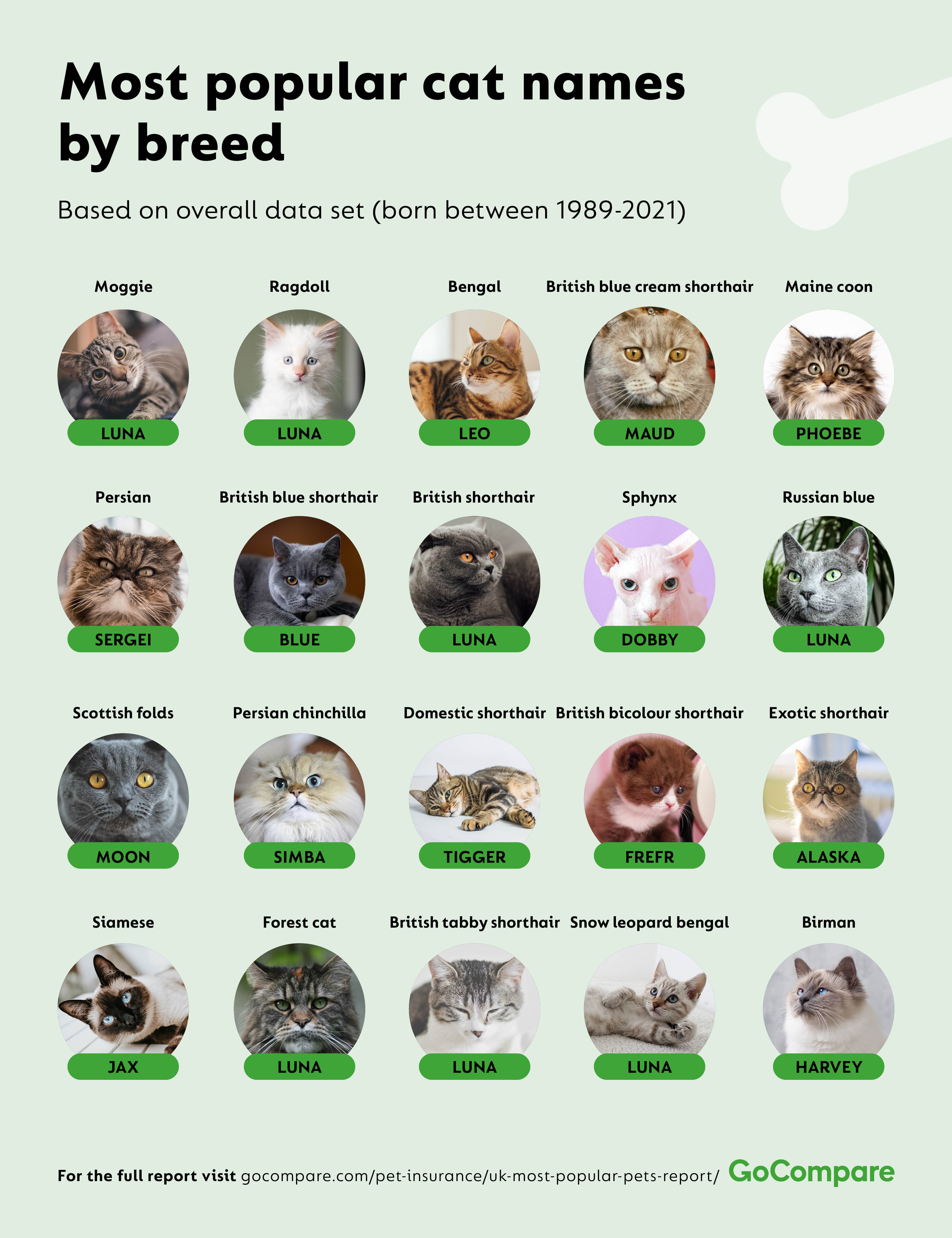 We all have that friend who posts nothing but pictures of their pet on Instagram, and it turns out they’re not alone. We’ve analysed the most used animal hashtags to work out which pet makes the most appearances on our grids.

Chihuahuas have seen more Insta-fame than any other dog, raking in a staggering 42,892,924 hashtags on the social platform. Famed for being the sidekick of Paris Hilton in the early 2000s, they’re still proving just as popular as they beat pugs (40.8m) and French bulldogs (38.4m) to take the crown. 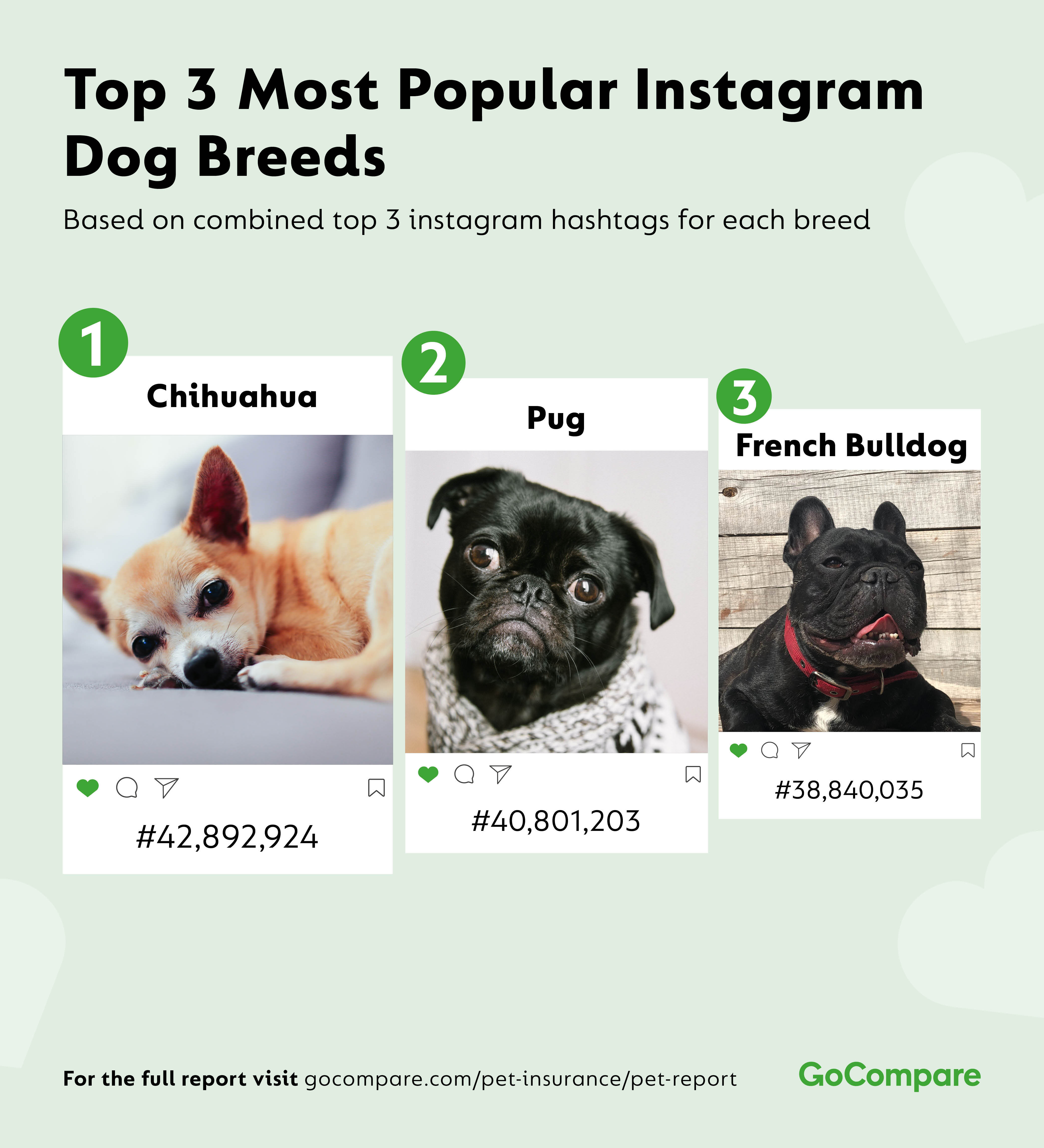 Cats fall some way behind in the social media rankings. With a fraction of the count at a mere 9.6 million hashtags, the maine coon’s distinctive appearance sees it take pole position. Capable of growing up to one metre in length, not only do they feature heavily on people’s grids, they’ll take most of it up.

Second in the cat rankings is the British shorthair with 8.8 million appearances, while the classic tabby rounds up our top three with 7.4 million. 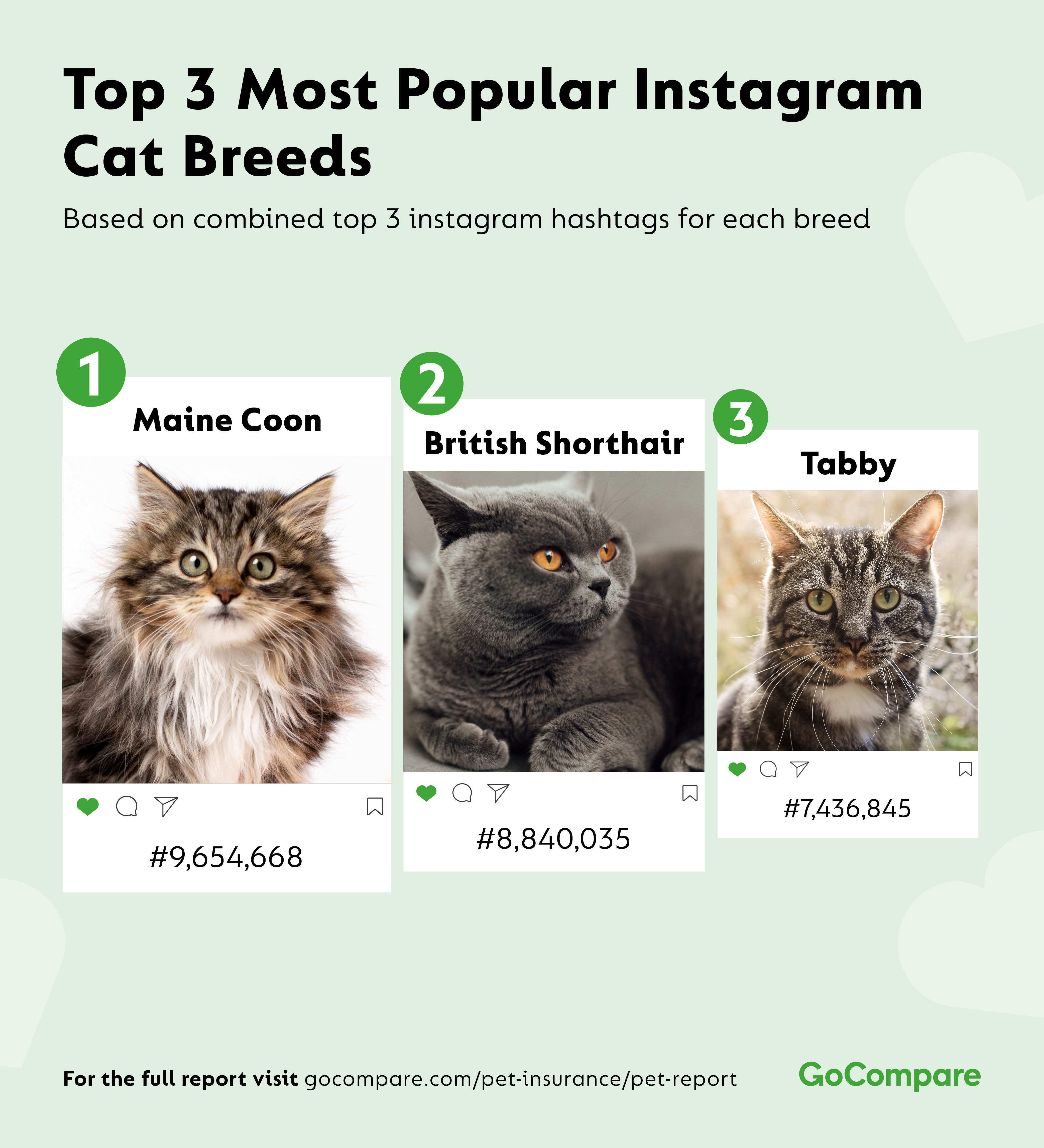 Has the Covid pandemic brought a pet into your home?

Insuring your pet can save you lots of money in the future. While we all do our best to keep them fit and healthy, their tendency to eat everything and explore the outdoors can see them pick up all kinds of nasty illnesses, so it always makes sense to have them covered.

We’ll compare the best pet insurance quotes to cover all your best friend’s needs. Whether they’re a giant woofer or a tiny ball of fluff, we can help you keep them barking and meowing for years to come.

All data taken from enquires/quotes made for pet insurance at GoCompare since Sept 2019. The quotes included, account for pets born between 1989-2021.